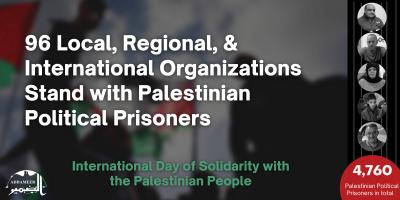 On the International Day of Solidarity with the Palestinian People 96 Organizations Stand with Palestinian Political Prisoners.pdf

This International Day of Solidarity with the Palestinian People, Addameer calls on the international community to demonstrate support for Palestinian political prisoners, both directly with the actions of the Palestinian Prisoner Movement, as well as through demanding an end to the Israeli occupation authorities’ arbitrary policies and practices of deprivation of liberty; administrative detention, inhumane prison conditions and a crackdown on civil society activism, all of which serve to construct and maintain the Israeli apartheid regime.

As recent Israeli elections recorded a swing to the far-right and the targeting of activists and peaceful protesters has vastly increased, the conditions for Palestinian prisoners mirror those on the ground. Currently, 4760 Palestinian political prisoners are held in Israeli occupation prisons, including 160 children and 33 women. Of that number, 820 are administrative detainees, held without charge or trial based on undisclosed "secret information," four of whom are children and three are women.

Over the last two years, Addameer has documented a significant and rapid increase in Israel's use of administrative detention, not only as a tool to quash legitimate civil resistance and civic work against the Israeli settler-colonial and apartheid regime but as a form of control and intimidation over the Palestinian people as a whole. From within prisons, Palestinian political prisoners and detainees have used the tools available to them to stand up against the systemic discrimination and violation of their basic rights, engaging in individual and collective hunger strikes, abstentions from medical treatment, and a collective boycott of military courts.

Recently, renowned international human rights organisations, including Amnesty International and Human Rights Watch, have built on the work and research of Palestinian civil society in recognising Israel's policies and practices of domination, fragmentation and oppression against Palestinians amount to apartheid. International criminal law defines apartheid as a crime against humanity committed through inhumane acts "in the context of an institutionalised regime of systematic oppression and domination by one racial group over any other racial group" with the intention of maintaining such a regime. Israel's establishment of dual bodies of law discriminately governing people based on nationality, and the unequal application of administrative detention, through which thousands of Palestinians have been incarcerated for security offenses in comparison to a "handful" of Israelis, was highlighted by Human Rights Watch as a specific modality of its apartheid regime.

Administrative detention, a colonial practice first used by the British Mandate and reappropriated by the Israeli regime, is the indefinite imprisonment of individuals, without trial or charge, whom Israel alleges may pose a future “risk to the security of the area." The decision is made based on "secret information," which is neither disclosed to the detainee nor their lawyer. The inherent structure of Israeli military courts, in which Israeli military officers serve as the judge and prosecutor, ruling following Israeli military orders issued by the Israeli military commander precludes any independence and impartiality, violating the essence of fair trial guarantees. It is therefore impossible to mount a defence. A person can initially be detained for six months; however, this order can be extended indefinitely. Detainees, therefore, have no idea when they will be released; taking a major psychological toll on them and their families.

Despite its blatant violation of fair trial standards, Israel acts with impunity and is indiscriminate in the use of administrative detention; targeting university students, former prisoners, children, and vulnerable individuals. The year 2021 saw a surge of 1,695 administrative detention orders, concentrated in May and June, as part of Israel’s campaign of mass arbitrary arrests following the escalation of aggression against the Palestinian people across the occupied territories. On 12 May 2021 alone, the homes of almost 60 Palestinians, a group constituted of journalists, activists, and Palestinian Legislative Council candidates were raided and arrested- 25 of this group were transferred to administrative detention. Between January to October 2022, Israeli occupation authorities issued around 1,789 administrative detention, already surpassing the number of orders from last year. Further, Israel is increasingly renewing detention orders as a method of suppression, ensuring that prisoners remain detained; between June and October 2022, there were 628 renewal orders and 452 new orders.

In January 2022, all Palestinian administrative detainees, around 500 at that time, initiated a collective boycott of the Israeli military judicial system. The detainees refused to participate in military court proceedings at all levels, and their legal counsel did not appear on their behalf. The boycott called for an end to administrative detention. Officially, the collective military court boycott ended in July 2022; however, many detainees continue their boycott, emphasizing the lack of trust in any judicial process and fair trial guarantees under the Israeli judicial system. As Israeli military judges refuse to acknowledge the protest, military court hearings and judicial reviews of administrative detention orders continue to be held in the absence of the detainees.

Hunger strikes have long been used as a peaceful and legitimate means to demand basic rights. During 2021, Addameer documented an increasing number of 60 detainees undertaking hunger strikes- many of whom sustained permanent health consequences or imminent threats to life. In August this year, Palestinian detainee Khalil Awadeh ended his 172-day hunger strike. The following month, 30 detainees, including Palestinian-French human rights lawyer Salah Hammouri, launched an open hunger strike in protest of administrative detention. The hunger strike was suspended in October, following an agreement with Israeli occupation authorities to prioritise discussions on administrative detention and release elderly and sick detainees by the end of the year. The latter has yet to act on this promise.

Methods of Oppression of Palestinian Prisoners

Any resistance from the Palestinian Prisoner Movement is in the face of a brutal apparatus of unlawful policy, systematically wielded with absolute impunity to quash Palestinian spirits inside prison. Whilst administrative detention is one of Israel's most unjust policies, it is just one of the cruel processes levied on Palestinian prisoners. Once arrested, detainees are regularly subjected to physical, positional, and psychological torture, a practice effectively legalised through which "physical pressure" is permissible in situations of “necessity.” Beatings, solitary confinement, and sleep deprivation are also used. Such practices are regularly obscured through the complicity of medical professionals, and military courts, a point documented by Addameer in its Cell No.26 report this year.

The torture and ill-treatment of Palestinian prisoners are not limited to interrogation and are a threat levied on prisoners throughout their incarceration. Prison raids are well-documented, and used as a form of collective punishment by the Israeli Prison Services (“IPS”); systematically exploiting any excuse to deploy special forces into prisons to attack and harass Palestinian prisoners and detainees. In September 2021, six Palestinian prisoners escaped from the high-security Gilboa prison. The escaped detainees were eventually remanded, but not before the IPS embarked upon a campaign of collective punishment against all Palestinians held in Israeli prisons. 350 prisoners were transferred to unknown locations (notwithstanding that the illegal forcible transfer of protected persons from occupied territory into the occupying state constitutes unlawful deportation in contravention of international law). A lockdown on all prisons and detention centres was implemented, denying prisoners access to lawyers and family visits, in addition to conducting violent raids.

Designation of Addameer as a “Terrorist” Organization

Further, Israel has employed new methods to restrict those acting to defend the rights of Palestinians. On 19 October 2021, Addameer, along with five other Palestinian civil society organisations, was designated as “terrorist” organisations by the Israeli Minister of “Defense.” The offices of the six organisations based in the occupied West Bank city of Ramallah were raided by the Israeli occupying forces the following year. The designation, which has a profound impact on the safety of both the organisations’ staff and service users, is the latest event in Israel's crackdown on Palestinian civic space and targeted campaign to silence Palestinian voices. The designation has been widely condemned by the international community, including the United Nations and European Union, for its attack on legitimate human rights work and lack of evidential basis. Despite this, Israel has refused to amend its position. As long as the designation remains in place, Addameer's work in providing crucial legal representation for Palestinian prisoners, as well as documenting human rights abuses to hold Israel accountable on an international scale, remains at risk. Without the presence of civil society organisations, Palestinian prisoners lose vital support on the ground.

While various UN experts have attempted to hold Israel to account, it has repeatedly refused to abide by international law principles and engage with their demands. As a concluding remark, we recall the case of Ahmad Manasra, arrested in 2015 at the age of 13, and has been detained in Israeli occupation prison since. His publicly circulated violent interrogation drew widespread condemnation. Following years of imprisonment, including sustained periods of solitary confinement, medical reports have found that Ahmad now suffers from serious mental health problems, including schizophrenia and suicidal ideation.

"Ahmad’s imprisonment for almost six years has deprived him of childhood, family environment, protection, and all the rights he should have been guaranteed as a child. This case is haunting in many respects and his continuous detention, despite his deteriorating mental conditions, is a stain on all of us as part of the international human rights community […] To Ahmad we say, we regret we failed to protect you"

The impunity with which Israel is able to commit systematic human rights violations must end, before we fail to protect the Palestinian people, including prisoners. Amidst an aggravating political climate, the situation for Palestinian prisoners is only worsening. Addameer seeks to amplify the Palestinian Prisoner Movement’s demands to end Israel’s systematic and widespread reliance on administrative detention on the international stage; without this work, Israel's regime will further isolate and silence the voices of Palestinian prisoners. Vocal international solidarity with the movement is urgent and essential. It should further extend, not only to the civil society organisations who work to document and amplify the struggles of prisoners but through condemnation of Israeli apartheid and its use of administrative detention as a method of oppression.