No Education, no Awareness for Female Minors in Detention 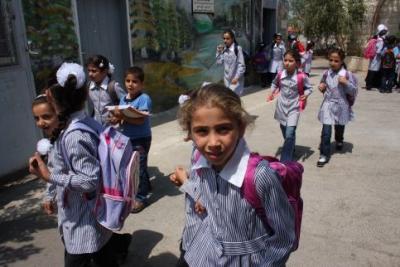 On Tuesday 10 April 2018, Addameer’s director Sahar Francis visited a number of female prisoners detained at HaSharon prison. The female detainees, PLC member Khalida Jarar, the 17-year-old Ahed Tamimi and her mother Nariman Tamimi, reported to Sahar about the general conditions of their detention focusing on a recent escalation related to education. Today, there are 62 female detainees. This figure includes 7 minors and 3 administrative detainees. This statement is written on behalf of the female prisoners to mark the Palestinian Prisoner’s Day, 17 April 2018.

Currently, female minors are participating in classes taught by PLC member Jarar solely. This is due to the fact that an external teacher has not been coming to the detention center for a number of weeks. Thus, Jarar has been preparing tawjehi students (last year of high school) for their final exams, which they are able to undertake while detained. Furthermore, Jarar has been providing these minors with awareness-raising sessions, primarily on human rights. to the primary aim of these sessions is to inform and educate the young girls in detention about their own rights, based on international human rights laws and conventions.

On 9 April 2018, the Israeli Prisoner Service (IPS) in the female section at HaSharon prison announced that Khalida is no longer allowed to prepare the young girls for their exams or provide these awareness sessions. In response, the female detainees on the same evening have closed the section and refused their dinner with the aim of demonstrating their rejection of the IPS’  decision. Eventually, the IPS promised to bring back an external teacher in less than a week and, in the meanwhile, Khalida was temporarily allowed to continue the classes and sessions.

All measures of international instruments and norms understand education to be a fundamental right. It is an economic, social, cultural, civil and political right, which is essential to the realization of other enshrined rights. International treaties and conventions emphasize that the right to education is part of the child’s basic rights, in times of peace and armed conflict. IHL specifically imposes on the occupying power the duty to ensure the right to education for the population under its control and stipulates that these responsibilities are not to be repudiated. In the event that they are, the state is to be held legally accountable internationally.

Article 94 of Section three of the Fourth Geneva Convention, which provides regulations for the treatment of detainees, stipulates that, “The Detaining Power shall encourage intellectual, educational and recreational pursuits, sports and games amongst internees [...] It shall take all practicable measures to ensure the exercise thereof, in particular by providing suitable premises”. Specifically, the article adds, “[a]ll possible facilities shall be granted to internees to continue their studies or to take up new subjects. The education of children and young people shall be ensured; they shall be allowed to attend schools either within the place of internment or outside."

The International Covenant on Economic, Social and Cultural Rights (ICESC) specifically articles 13 and 14ensure the right to education and asserts the state’s utmost responsibility for the realization of this right. Moreover, the Convention against Discrimination in Education, Article 1(b), provides clarification. It states that “for the purposes of this Convention, the term “education” refers to all types and stages of education, and includes access to education, its standard and its quality, and the conditions under which it is given.” The Convention on the Rights of the Child (CRC), specifically articles 28 and 29, emphasizes the need to achieve the full realization of this right progressively and on the basis of equal opportunity.

The Arrest and Detention of Palestinian Children

Palestinian children are being systematically targeted by the Israeli occupation forces, which arrest around 700 children annually. Throughout 2017, Israeli occupation forces arrest around 2000 children, half of them being from East Jerusalem. The goal behind the occupying power’s detention of Palestinian children, especially those aged 16-18 who constitute the pillar of community development, is to stunt the intellectual growth and awareness of the Palestinian people.

No Education, no Awareness for Female Minors in Detention

By depriving prisoners of their right to education, Israel not only seeks to inhibit the development of the Palestinian people, it seeks to stifle any form of intellectual resistance amongst detained children.  Unlike Israeli prisoners convicted of criminal offenses,  who are given the opportunity to serve their sentence in conditions that respect their humanity, Palestinian detainees who are imprisoned with the aim of being psychologically destroyed, spiritually impoverished, or turned into collaborators and tools in the service of the occupier. To achieve this dehumanization, the IPS adopts an approach that is complementary to the oppression and torture practiced in interrogation facilities. It aims to control, humiliate, and degrade detainees, with the aim of placing them under its full control. As such, the IPS destroys their identity and vitality.

What is currently taking place at HaSharon prison is not only a denial of education, it is also an attempt to curtail female prisoner’s ability to better understand their own oppression. These sessions are about the fundamentals of human existence, rights. The Israeli occupation forces, are not only violating IHL and IHRL but are also attempting to erase an understanding of the acts of the oppressor and to distort the Palestinian consciousness.

02-02-2023
In a Joint Submission to the UN Commission of Inquiry, Palestinian Organizations Highlight Israeli Policies to Entrench and Maintain its Settler-Colonial and Apartheid Regime
24-01-2023
Commemorating the International Day of Education by Highlighting the Reality of the Right to Education for Palestinian Political Prisoners
14-12-2022
Urgent Appeal to Commercial Airlines: Avoid Assisting in the Forcible Deportation & Transfer of Human Rights Defender Salah Hamouri