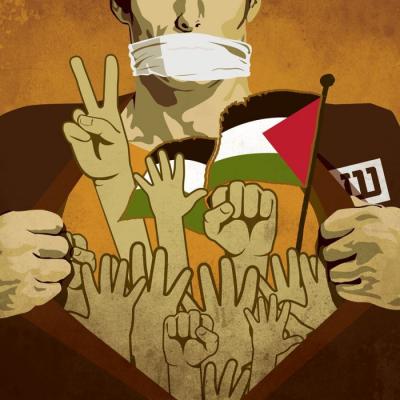 As more than 1000 Palestinian political prisoners have declared the beginning of an open hunger strike on 17 April 2017, Israeli occupation authorities have taken repressive policies and measures in order to put an end to the mass hunger strike.

Several hunger-striking prisoners and detainees have been thrown into isolation in order to separate them from their fellow prisoners. Special unit forces stormed and raided the hunger-striking sections in Nitzan, Ramle, Hadarim, Ashkelon, and Gilboa, prisons confiscating personal belongings. Additionally, several prisoners were transferred to other prisons, which resulted in a deterioration in their health condition due to the lengthy transfer process. Despite all these escalatory measures and psychological and physical repression, the prisoners and detainees remain in high spirits and reinforce the importance of the hunger strike.

Support events for the striking prisoners continued to grow throughout Palestine and all over the world, with events, solidarity tents and protests and marches in major cities, refugee camps and villages throughout the West Bank, Gaza and occupied Palestine ’48. International support continued to grow with protests in New York City, Boston, London, Rome, Madrid, Brussels, and Athens.

The collective hunger strike was launched on 17 April, Palestinian Prisoners’ Day, to achieve a list of demands. These demands include:

1 - The installation of a public telephone for Palestinian prisoners in all prisons and sections in order to communicate with their families.
2 - Visits
1 - Re-instate the second monthly visit which was stopped by the Red Cross.
2 - Regularity of visits every two weeks and not disabling them from any side.
3 - No relative of the first and second degree shall be prevented from visiting the prisoner.
4 - Increasing the duration of the visit from 45 minutes to an hour and a half.
5 - Allowing the prisoner to take photographs with the parents every three months.
6 - The humane treatment of family visitors at the prison
7 - Allowing children and grandchildren under the age of 16 in each visit.
3 - Medical file.
1 - Closing the so-called "Ramla Prison Hospital" for failing to provide the necessary treatment.
2 - Ending the policy of medical negligence.
3 - Conduct medical examinations periodically.
4 - Performing surgeries quickly and exceptionally.
5 - Allowing the entrance of specialized international doctors.
6 - Release of sick prisoners, especially those with disabilities and chronic diseases.
7 - Not to charge the prisoner the cost of treatment.
4 - Responding to the needs and demands of Palestinian women prisoners, both private transport and direct meeting without a barrier during the visit.
5- Al Bosta:
1 - Provide humane treatment to prisoners during their journeys by bus.
2 - Return prisoners to prisons from clinics and courts and not to keep them at the crossings.
3 - Preparing the crossings for human use and providing meals.
6 - Add satellite channels suitable for the needs of prisoners.
7 - Install air conditioning in prisons, especially in the prisons of Megiddo and Gilboa.
8 - The return of kitchens to all prisons and placed under the supervision of Palestinian prisoners.
9 - The introduction of books, newspapers, clothing, food and special purposes of the prisoner on visits.
10 - Ending the policy of solitary confinement.
11 - Ending the policy of administrative detention.
12 - Re-allowing education through the Hebrew Open University.
13 - Allowing the prisoners to submit the Tawjihi examinations in a formal and agreed manner.

We urge all supporters of Palestinian prisoners and the Palestinian people to urgently take action and join in the campaign of solidarity to achieve their demands.