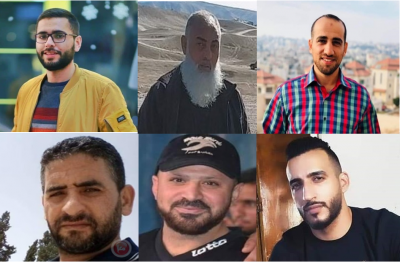 On 30 September 2021, Addameer’s lawyer was able to visit hunger-striking detainees Kayed Fasous and Alaa Al-Araj who are currently detained in Ramleh Prison Clinic following several transfers to Israeli hospitals after the deterioration of their health. On more than one occasion, Kayed Fasous refused to drink water for two days in protest further worsening health conditions and leading to repeated transfers to the hospital, during which he additionally refused medical examinations. Kayed was last transferred to Barzilai Hospital following an abnormally low heart rate, which posed an imminent threat to his life. Nevertheless, Kayed spent five days in the hospital under heavy security, with over 15 prison guards watching over him and his feet and hands handcuffed to the hospital bed. Kayed was not allowed to go to the bathroom and was instead given a flask to relieve himself. Medical examinations revealed a severe deficiency in potassium and vitamin B. He lost over 35kg after his weight dropped to 59kg, from his original weight of 95kg at the beginning of his strike. Currently, Kayed Fasous is incarcerated in Ramleh Prison Clinic, where he suffers from pain in his feet, joints, and back, severe cramps, headaches, and interrupted sleep, as he is unable to sleep more than two hours due to the daily inspections, constant noise, and knocking on windows by Israeli prison guards.

Similarly, Alaa Al-Araj suffers from severe deteriorating health conditions, as confirmed by Addameer’s lawyer, including dizziness, fainting, difficulty in concentration, forgetfulness, pain across his body, particularly his face and extremities, loss of bladder control, inability to sleep, and the regurgitation of water. The poor physical conditions of his health is in part due to, and exacerbated, by harsh retaliatory practices by Israeli Prison Services (IPS). Following the beginning of his strike, Alaa was placed in solitary confinement, during which he spent two days in an extremely filthy and small cell, with closed windows, and “full of cockroaches” that he was forced to clean himself. IPS confiscated his personal belongings, including blankets, a towel, a Quran, and a prayer rug. Following the deterioration of his health, Al-Araj was transferred twice to an Israeli hospital before being returned to Ramleh Prison Clinic, where he currently resides. Both Alaa Al-Araj and Kayed Fasous recounted to Addameer’s lawyer retaliatory punitive measures by IPS, as well as the provocation of guards who would bring food to them and eat loudly in front of them, while also purposely delaying answering to any necessities they asked for.

Meanwhile, on 11 October 2021 Adv. Jawad Boulos was able to gain access to three prisoners on hunger strike, Miqdad Al-Qawasameh, currently in critical condition in the Israeli Kaplan hospital, Hisham Abu Hawasheh, and Shadi Abu Akar, both of whom are incarcerated in Ramleh Prison Clinic. Boulous confirmed the precarity of Miqdad’s condition, who has since drastically lost weight, suffering from severe symptoms due to his deteriorating health, including difficulty in speaking, and now faces an imminent threat to life, which increases with every passing hour. On 6 October 2021, the Israeli High Court ruled to “freeze” the detention order against Miqdad Al- Qawasmeh. The decision to “freeze” the administrative detention order does not in any way cancel the order or eliminate the risk of renewing it, or even proceeding with the remaining duration afterward. Rather, it is an attempt to break Miqdad’s ongoing open hunger strike, while circumventing his right to legitimately defend himself and seek justice. Miqdad continues to remain on hunger strike in protest of his administrative detention order, surpassing 84 days.

In addition, Adv. Boulos noted the poor and dangerous health conditions of Hisham Abu Hawasheh and Shadi Abu Akar, both of whom were brought on wheelchairs. They continue to suffer from severe headaches and pain across their body, severe emaciation, constant vomiting, and difficulty sleeping. On 11 October 2021, an Israeli military court held a session that was scheduled to confirm the renewal of his administrative detention order for another six months. The confirmation was postponed by the court to 19 October 2021, pending a medical report on his health condition. Similarly, Alaa Al-Araj is expected to be transferred to an Israeli hospital to provide the Israeli High Court with an updated medical report on his health conditions to decide on the suspension of his administrative detention order. Moreover, in addition to the six prisoners, Palestinian detainee Khalila Abu Aram announces his hunger strike on 10 October 2021, in solidarity of the current striking detainees. Other detainees may also join in the coming days in solidarity.

Noting the gravity of the situation, Addameer Prisoner Support and Human Rights Association submitted an update to UN Special Rapporteurs on 12 October 2021, following up on an urgent appeal submitted in September, on the conditions of the six hunger-striking detainees. Addameer especially calls on the respective mandates to intervene to call on Israel, as the Occupying Power, to end its illegal and systematic practice of administrative detention against the Palestinian people.

Addameer stresses the seriousness of the hunger-striking detainees’ health conditions, which is exacerbated by IPS retaliatory and punitive practices and ill-treatment. Addameer calls upon their immediate and unconditional release, along with the release of all administrative detainees and the end to the Israeli occupation’s systematic practice of administrative detention.