The cultural and educational life of Palestinin political prisoners in occupation prisons. 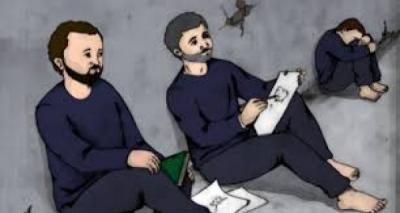 The Israeli occupation systematically denies Palestinian prisoners and detainees of their most basic human rights while incarcerated, which in turn has shaped their continuous struggle in Israeli prisons. One particular right – the right to education – has been systematically and deliberately denied to prisoners over the course of decades. For Palestinian prisoners to access education, they have historically had to resort to collective hunger strikes and other forms of resistance to obtain the right to own pens and papers within the prison walls. In 1992, prisoners won the right to basic access to formal secondary and higher education as a result of one of the largest and most well-known collective hunger strikes in 1992.  This resulted in a paradigm shift in the process of education, and allowed for prisoners to apply to educational institutions, which was incredibly important as there was a rising number of prisoners interested in pursuing their academic careers at the time. However, the Israel Prison Service – backed by the Israeli High Court – continued to put a chokehold on prisoners' education. The following executive summary outlines the history of Palestinian political prisoners’ quest for their right to education.

Upon the signing of the Oslo Accords in 1993, the Palestinian prisoners’ experience in Israeli prisons was marked with continuous struggles and efforts that finally led to books being allowed and libraries established in the prisons. The prisoners were self-organized and devoted to the educational and cultural discussions that tackled numerous issues related to prisoners’ rights and Palestinian resistance.

Thousands of Palestinian political prisoners arrested during the Intifada were released as part of the agreement in the Oslo Accords. Although an exorbitant number of prisoners still remained incarcerated, this shift weakened the prisoners’ movement and in turn affected the cultural framework established by the prisoners at the time. The vibrant cultural discussions happened less frequently and their focus shifted, as did the prisoners’ ability to use hunger strikes and other forms of collective action to gain their rights.

The International Committee of the Red Cross (ICRC), who had previously played a monumental role in bringing books, educational material and IQ games into the prisons, particularly for child detainees, began to withdraw from their responsibilities in the mid-1990s. Eventually, the ICRC’s rule diminished to non-existent in some prisons.

Following this shift in the prisoners’ movement and abandonment by the ICRC in the mid 1990s, the prisoners started to re-organize themselves, and prioritized access to education as their collective demand. The 1992 hunger strike, in which thousand of prisoners participated and lasted 19 days, culminated in several victories in this regard. First, the prisoners were – for the first time – were allowed to sit in the secondary education certificate exam, known as “tawjihi” – to obtain their high school diplomas. Despite this huge win for the prisoners whose educational advancement was halted for decades, the Israeli occupation still restricted them to only sit for the humanities exam, thereby denying access to any science or mathematics diplomas. Additionally, the prisoners won their right to study in a limited number of academic programs in the Israeli Open University; such as Theology, sociology, finance and business administration, psychology, and political science. However, the prisoners still faced an uphill battle in accessing formal education, as the Israeli Prison Service (IPS) was responsible for facilitating the process and deliberately obstructed the process through a variety of means. For example, the IPS, who had to give the final sign-off on enrolling in any program, often denied prisoners from doing so under pretexts of security measures, claiming full enrolment capacity and other arbitrary reasons. Also, they often intentionally delayed delivering educational materials, making it impossible for the student prisoners to keep up with their coursework, as well as repeatedly transferred them to different prisons during the academic term or during exam periods, forcing many to have to re-take the courses.

Restrictions on the prisoners’ education gradually worsened with time, particularly as many prisoners’ rights were revoked as a punishment for the capture of Israeli soldier Gilad Shalit during an Israeli military raid on Gaza in 2006.  The restrictions increased in 2011 after the then Israeli Prime Minister Benjamin Netanyahu made the proclamation that “the party is over” for political prisoners and announced that no Palestinian prisoners would be allowed to obtain their BA or MA degrees in prison. Netanyahu’s speech resulted in a full ban on the prisoners’ formal education in prisons, and halted the tawjihi exam and the Israeli Open University study programs that the prisoners had fought hard to obtain access to. Some of the prisoners who were close to graduation filed formal complaints in the Israeli High Court to no avail, as the High Court ruled the ban legal and permissible. In the ruling, the  High Court stressed that the prisoners’ education is a privilege that can be withdrawn at the discretion of the IPS. It is worth noting, however, that while Netanyahu’s speech was a public announcement of the crackdown on prisoners’ rights, the IPS had already cancelled the educational programs in most prisons in 2008. Thus, Netanyahu only enforced what had already taken place.

In the midst of the ban on formal paths to education, the Palestinian prisoners continued to fight for the right to education through alternative means. They attempted to bridge the gap by organizing cultural discussions, literacy sessions, educational workshops, establishing libraries inside the prisons, as well obtaining newspapers and magazines for the prisoners. Many of these alternatives were not new, but rather gained importance after the prisoners were banned from joining the Israeli Open University. Moreover, the prisoners themselves played a key role in the educational process by taking on the role of “teachers” and helping each other with languages and other forms of knowledge. In 2013, the prisoners worked with the relevant Palestinian ministries to re-gain their ability to take the the tawjihi exam in prison. Moreover, the prisoners established connections with some Palestinian universities and developed BA and MA programs that have graduated dozens of prisoners over the years.

More continue to be put into place to this day to further stifle the prisoners, with Israeli authorities banning the entry of educational books into the prisons for years. Furthermore, Israeli authorities continue to confiscate books and other educational materials that prisoners managed to bring into the prisons. In 2018, the IPS confiscated around 2000 books from Hadarim Prison, crushing the library they had built up for years. Moreover, the IPS punishes prisoners by transferring them to other prisons or cells when they discover any attempt to pursue education beyond the prison walls.

Child and female prisoners are subjected to the same restrictions and lead similar experiences in Israeli prisons. Despite the fact that child prisoners resorted to the Israeli courts and obtained a court ruling that allows them to continue their education as according to the Palestinian curriculum in 1997, the reality of the matter is far from it. The IPS only allows teachers from the Israeli Ministry of Education to teach two subjects (Arabic and mathematics), thereby severely hindering child development. The limited subjects and irregularly of classes tremendously affect their academic careers.

The right to education is also guaranteed under international humanitarian law. Article 94 of the Fourth Geneva Convention states that “The Detaining Power shall encourage intellectual, educational and recreational pursuits, sports and games amongst internees, whilst leaving them free to take part in them or not. It shall take all practicable measures to ensure the exercise thereof, in particular by providing suitable premises. All possible facilities shall be granted to internees to continue their studies or to take up new subjects. The education of children and young people shall be ensured; they shall be allowed to attend schools either within the place of internment or outside. Internees shall be given opportunities for physical exercise, sports and outdoor games. For this purpose, sufficient open spaces shall be set aside in all places of internment. Special playgrounds shall be reserved for children and young people”.

Additionally, Article 77 of the United Nations Standard Minimum Rules for the Treatment of Prisoners states that: “Provision shall be made for the further education of all prisoners capable of profiting thereby, including religious instruction in the countries where this is possible. The education of illiterates and young prisoners shall be compulsory and special attention shall be paid to it by the administration. So far as practicable, the education of prisoners shall be integrated with the educational system of the country so that after their release they may continue their education without difficulty. Recreational and cultural activities shall be provided in all institutions for the benefit of the mental and physical health of prisoners.”

The occupying power does not only ban Palestinian prisoners from enjoying the right to education, but continues to deliberately target and arrests Palestinian students. In 2019 alone, the number of imprisoned Palestinian students stood at roughly (250-300). In 2019, around 75 university students were arrested from Birzeit University alone, primarily for being active in student unions.