Joint Monthly Report: 551 Palestinians were arrested in the month of April 2018

As part of ensuring the accountability of the occupation forces, these organizations publish a joint monthly report that deals with the past month of violations against the Palestinian prisoners and people. Through providing such monthly analyses, the continuous and political nature of these violations are exposed.

The report elaborated that of the 551 Palestinians arrested during the month of April, 124 of these were children and 9 were women.

In regard to the policy of Administrative Detention, there were 80 orders issued this month by the occupation. Of this 80, 32 were new and the 48 were renewals.

The report provided further details on the situation for Palestinian women in detention. Of the 63 female prisoners, 8 of them are children, 9 are injured, and 3 are being held under Administrative Detention.

The boycott is ongoing though, Abu Akkar, a member of the committee representing the administrative detainees, assured Addameer on 1 May that a meeting between the intelligence services and the prisoners will take place within a few days.

The organizations concluded by restating that Israel, as the occupying power, has an obligation to abide by the Fourth Geneva Convention and all of the relevant human rights law instruments. 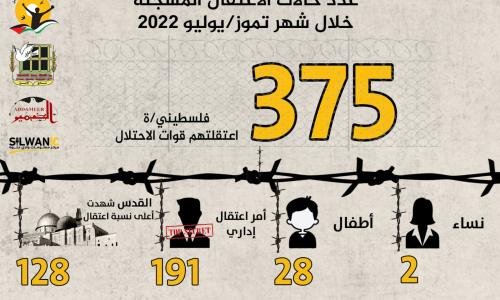