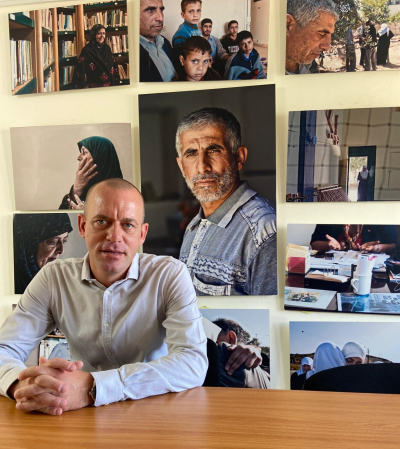 Earlier this morning, the Israeli Interior Minister Ayelet Shaked officially notified 36-year-old Palestinian-French human rights defender Salah Hammouri of the revocation of his permanent residency status in Jerusalem based on a "breach of allegiance to the State of Israel." This decision comes after being approved by the Israeli Attorney General Avichai Mendelblit and Minister of Justice Gideon Sa'ar. The initiation of his residency revocation and forced deportation, pursuant to Amendment No. 30 to the Entry into Israel Law of 1952, comes on the heels of the Israeli apartheid regime's targeted harassment campaign against Salah Hammouri, a vocal Palestinian human rights advocate, long-time employee at Addameer Prisoner Support and Human Rights Association, and former prisoner.

In communicating the decision to move forward with residency revocation on the basis of "breach of allegiance," the Minister of Interior cites intentionally vague and broad allegations of "terroristic activities" and/or affiliation with "terrorist entities," based on withheld "secret information" withheld. The withholding of "secret information" mirrors the Israeli occupation's administrative detention practices, in stark violation of fair trial standards, which place Palestinians under indefinite detention based on secret material that cannot be disclosed to the detainees or their lawyers. To this end, she further cites recommendations based on his past history of arrests—most of which were under administrative detention, without charge or trial. Notably, the Ministry explicitly alludes to the notable escalation of permanent residency revocation of Palestinian Jerusalemites for "breach of allegiance," as exemplified by the case of Salah Hammouri, by stating that the decision was necessary "to deter others from breaching allegiance to the State of Israel."

As a Palestinian human rights defender who challenges Israel's widespread and systematic human rights violations and voices legitimate calls for justice and accountability, Salah has endured constant Israeli attempts to intimidate him and his family, including previous arbitrary arrests, banning from entering the West Bank for almost 16 months, and the deportation of his wife, Elsa Lefort, a French national, separating him from his wife and son in 2016.

Previously, on 3 September 2020, the Israeli occupying authorities notified  Salah Hammouri of the Ministry's intention to revoke his permanent residency status for so-called "breach of allegiance" to the State of Israel. Notably, Salah and his legal counsel, HaMoked Center for the Defence of the Individual and Advocate Lea Tsemeel, submitted written and oral claims challenging the decision.

Alarmed by the imminent threat of having his residency revoked, which denies Salah's basic human rights to family life, freedom of movement and residence, including the right to leave and to return to his country, freedom of expression, as enshrined in Article 19 of the ICCPR and freedom of peaceful assembly and association, in line with Articles 21 and 22 of the ICCPR.[1] Residency policies embedded in Israel's regime of racial domination and oppression are designed to maintain a perilous legal status for Palestinians in East Jerusalem and uphold an Israeli-Jewish demographic majority in the city.

Israel's policy of revoking Palestinian residency rights in East Jerusalem further violates Article 43 of the Hague Regulations and Article 64 of the Fourth Geneva Convention, which stipulates that the Occupying Power may not act as a sovereign legislator or extend its own legislation over the occupied territory.[2] Moreover, the criterion of allegiance to Israel is illegal. In fact, international humanitarian law explicitly forbids the Occupying Power from demanding allegiance from the occupied population, as stated in Article 45 Hague Regulations and Article 68(3) of the Fourth Geneva Convention.[3] Furthermore, the transfer of Palestinians from occupied East Jerusalem is considered a war crime under Article 8 of the Rome Statute of the International Criminal Court.[4] The revocation of residency policy forms part of a widespread and systematic transfer policy directed against a civilian population., which may also amount to a crime against humanity under Article 7 of the Rome Statute.[5]