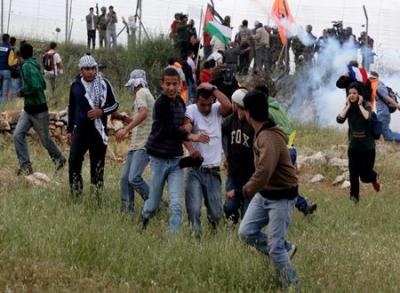 The Village
Kufr Qaddum is a Palestinian village located 16 kilometers west of Nablus in the Occupied West Bank. The village has a population of 3,700 and a total land area consisting of roughly 20,000 dunams. The village previously had a larger population but it decreased due to immigration to cities and obstacles imposed by Israeli Occupation Forces. Kedumim, one of three nearby settlements, was established on 4000 dunams of land in 1978. According to B’Tselem’s July 2010 report on Kedumim, “the construction of approximately 59 [Kedumim] units deviated from the 'state lands’ allotted to the settlement; two permanent structures and 12 caravans were erected on private Palestinian land; and a new neighborhood, comprising some 30 caravans, was built west of the settlement, all of which deviating from the allotted 'state land.’”[1]

Kedumim has grown since then, and has seized large swaths of privately owned Palestinian land for security reasons, as determined by the Israeli Occupation Forces (IOF). Murad Shtaiwi, the main coordinator for the Kufr Qaddum Popular Resistance Committee, explains that 11,000 dunams of land (primarily used for farming purposes) are inaccessible without military permits. In addition, farmers continuously face attacks by settlers during the olive picking season; such attacks include breaking trees and stealing olives.  According to the weekly protests, however, the IOF’s closure of the village’s main access road in 2003 is the greatest concern.
Shtaiwi describes that before 2003, the residents of Kufr Qaddum would use a shorter road to the east in order to come and go to nearby cities and villages. However, as the settlements expanded so that they overwhelmed the road, it became closed for Palestinian use. The only alternative road is roughly six times longer than the previous route, disrupting the villagers’ ability to attend university, their jobs, and other vital aspects of their economic and social wellbeing. Three Palestinian deaths relating to the road’s closure occurred between 2004 and 2005. Furthermore, it is likely that settlement expansion will continue on the 700 dunams of stolen land surrounding the road.
Although Kufr Qaddum’s Popular Resistance Committee took their case to the Israeli High Court in 2003, the legal status of the road remains unchanged. Murad describes the situation saying that “if we can transfer this issue to the international courts, and if we can win back the road, that will be a major victory for Palestine.”
The Popular Resistance Committee

The Kufr Qaddum community began to organize weekly protests in July 2011. Protests are well attended on a regular basis, drawing crowds of hundreds of local villagers and solidarity activists each week. The nature of the IOF’s raids has changed in the village since then: as Murad explains, “the arrests since July 2011 until now are because of the protests. This includes over 120 arrests, including 10 children under the age of 18.” The IOF also use different methods of arrest during the weekly demonstrations by either setting traps for protestors, or digging deep holes and hiding them for protestors to be caught in.  In an attempt to frighten activists and members of the popular resistance committee, the IOF raid the village, throwing sound bombs and waste water on the houses, without even arresting anyone. He also details that the cumulative court fines resulting from these arrests have soared to over 750,000 shekels, causing great financial stress to the already difficult situation. The protests, however, continue.

The arrest of Aqel Shtewy. Hear his account here.
Threats Against Human Rights Defenders
Attacks on HRDs in Kufr Qaddum fall neatly within the auspices of the EU’s framework. The IOF has regularly used force, threats, or collective punishment with the aim of dissuading the villagers from participating in the weekly protests that, although nonviolent, are still deemed illegal according to Israeli military order 101.
In October 2013, the IOF waged an attack on the mosque that is used as a gathering place before the protests during Friday prayers.  The attack caused multiple suffocation cases and the death of one 80-year-old man.
In June 2013, the IOF posted photos of four boys [photo left], all under the age of 18, with captions stating: “We are the military. Be careful: we’ll catch you if we see you and we’ll come to your house.” The boys were, and continue to be, regular participants in the demonstrations. One of the boys, Omran Hekiman (age 17) was later arrested in August 2013 and was still detained in Israeli prison as of March 2014.
Murad Shtaiwi: Human Rights Defender

Murad serves as the primary coordinator for the Kufr Qaddum Popular Resistance Committee. Just one day after the highly publicized claim that the IOF would discontinue the practice of conducting night raids,[2] Murad was arrested in the very early morning of 20 February 2014.
Just after midnight on 20 February 2014, Murad’s brother looked out the window and alerted the family that there were soldiers behind the house. Murad looked and saw that there was a soldier in the bushes near his home, pointing a gun at the house. Murad dressed quickly and rushed to the door. Their faces shielded by masks, the two soldiers swore and screamed at Murad and dragged him out of the house. Just before Murad was blindfolded and handcuffed extremely tightly, he estimated that there were 100 soldiers surrounding the house. He noted that everything about them: from the way they spoke, to how they physically interacted with him, was filled with intense hatred. He said that if the handcuffs had been on for more than 20 minutes he probably would have lost his hands—they were tight enough to completely cut off blood circulation. He told the soldiers that he has breathing problems, but they ignored him. They put him in the jeep and forced his head to the ground. They punched and kicked his head with their boots until he lost consciousness temporarily. The next thing he knew, he was being dragged out of the jeep by his ankles, and his shoes fell off. While dragging him out of the jeep and across the ground, the soldiers verbally abused him by cursing about his family.
The soldiers then took him to Kedumim Settlement, where they continued to curse, scream, and beat him. He then was forced to stand, inadequately dressed, in the cold night air for 2-3 hours. The soldiers then brought him to a room for interrogation.
Two soldiers interrogated Murad. Based on Murad’s account, the soldiers were very specifically targeting him as a HRD. He explained that the soldiers lectured him for a long time, saying that he “can stop the demonstrations,” that he is “influential in Kufr Qaddum.” They tried to make Murad believe that the protests are futile by explaining that “the road needs a political decision [to be opened] from Netanyahu, and what is this village to Netanyahu? The only three things that he is worried about is 1) Iran, 2) Iran, and 3) Iran.” Most alarmingly, the soldiers threatened that, “maybe a nervous 18 year-old soldier at the next protest will shoot live ammunition at your people,” and that he “can’t control all the soldiers.”
Murad then asked, “Are you finished with your speech?” He continued to describe that he “never encourages or supports violence,” and that “peaceful, nonviolent marches are a type of resistance that is supported all over the world.” He exclaimed that these protests are protected under international law.
The soldiers very clearly demonstrated that they targeted Murad because of his role as a coordinator and organizer, and most importantly because he meets the EU standards as a human rights defender. They tried to threaten Murad that all of the arrests, fatalities, injuries, and every stone thrown at soldiers in Kufr Qaddum, would be his responsibility. He responded “I don’t have an effect over the demonstrations. You are the occupier; you have all of the power. Only you can stop this. If one of us is arrested and released on Wednesday, anyone in the village would go straight to the protest on Friday. Arrests and threats are only going to make us more determined and focused on our goals. I do not tell them to protest. Your actions compel them to protest.”
In total, seven people were arrested on the same morning as Murad. Of the seven, only four were released at 8 AM the same morning. One of the remaining detainees was very badly beaten on his head and was bleeding profusely the last time anyone in the village saw him. They suspected that he was taken to a prison clinic, but the man’s brother was told that he was taken to Ariel settlement, and that the family needs to find a lawyer.
The arrests on 20 February 2014 are not an isolated incident against Murad and other protesters. Murad faces regular intimidation at checkpoints because of his organizing activities. During a previous encounter with the IOF, at which time occupation soldiers attacked his home with teargas and ransacked all of the belongings, one officer that went by the same “Sabri” told Murad “You must stop the demonstrations,” and threatened him with arrest.
Murad was rearrested on 29 April, 2014, where he was taken to Kedumim detention center, and then transferred to Huwwara detention center, and a few days later to Megiddo. According to Murad’s family, during the arrest process, the soldiers threatened him and tried to choke him. A list of charges was presented against Murad, which include the responsibility and the organization of an unauthorized demonstration, encouraging  people to participate in the demonstration, and throwing rocks (the charge of throwing rocks was removed from the list of charges on Murad’s 27 August 2014 court date). On 3 December 2014, Murad was sentenced for 9 ½ months and a 10,000 NIS fine. The sentencing came after a plea bargain to drop many of the charges, with the only remaining charge that he was organizing (illegal) demonstrations.
[1] “By Hook and By Crook: Israeli Settlement Policy in the West Bank,” B’Tselem, (July 2010).
[2] http://www.jpost.com/Defense/EXCLUSIVE-Chief-West-Bank-Prosecutor-says-…