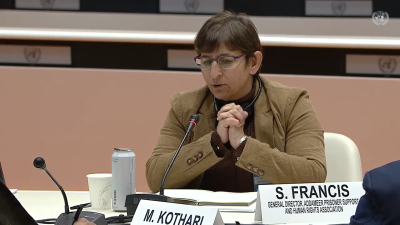 Addameer Prisoner Support and Human Rights Organisation ("Addameer"), represented by its General Director Adv. Sahar Francis participated last week in a public hearing as part of a series held by the Commission of Inquiry on the Occupied Palestinian Territory, including East Jerusalem and Israel (the "COI"). The series of hearings focused on the Israeli occupation’s military raid and closure orders, the arbitrary “terrorist” designation of six Palestinian civil society organizations, and the killing of Palestinian-American journalist Shireen Abu Akleh by Israeli forces.

On 19 October 2021, Addameer, along with Al-Haq, Bisan Centre for Research and Development, Defence for Children International – Palestine, the Union for Agricultural Work Committees, and the Union of Palestinian Women's Committees were designated as "terrorist" organizations by Israel's “Defence” Minister Benny Gantz. The six organizations were also declared "unlawful associations" under the 1945 Emergency (Defence) Regulations. The designation and its associated lack of evidence were described by representatives from the United Nations ("UN") as "a frontal attack on the Palestinian human rights movement, and on human rights everywhere" and has been widely denounced by the European Union and civil society organizations across the globe. On 18 August 2022, the Israeli occupying forces military raided the offices of the six organizations, welding their entrances shut and seizing confidential files and equipment.

The COI's series of public hearings (held in Geneva from 7 – 11 November 2022) invited testimony from the six organizations as well as from witnesses and legal representatives related to the case of Shireen Abu Akeleh. The hearings are part of the COI's mandate from the UN Human Rights Council to investigate alleged violations of international human rights law and international humanitarian law in the occupied Palestinian territories, including East Jerusalem and Israel, as well as the consideration of the underlying root causes of any violations (including systematic discrimination and repression based on national, ethnic or religious identity).

General Director Ms. Francis testified on behalf of Addameer on 7 November 2022, the first day of the public hearings (available to be watched in full here). She outlined the critical work that Addameer undertakes defending the rights of Palestinian prisoners and detainees before the Israeli military court system and the Palestinian Authority, as well as the documentation and monitoring of detention conditions, including interrogation and torture. Ms. Francis explained that the attack on the six organizations is part of a systemic and ongoing campaign targeting civil society groups and human rights defenders, interlinked with the Israeli judicial system (which holds jurisdiction over the majority of the Palestinian territories):

"[Civil society groups are] under attack, not just with the designation that took place in 2021, but much before. The campaign against the Palestinian civil society [is] totally connected with the whole military system that the Israeli occupation implemented and developed in the occupied territories since '67, because if we take the military orders in place (more than 1800 military orders) that interfere and control every aspect of our daily life as people under the occupation, [many] of these military orders are talking about civil society activism. All political parties in Palestine are still declared illegal, including Fatteh, the main party of the PLO (Palestine Liberation Organisation)."

Ms. Francis specifically highlighted the case of Samer Arbeed, a father of three, arrested late at night in September 2019. Samer was interrogated and tortured by Israeli occupying forces for two days, resulting in life-threatening injuries, including renal failure and 11 broken ribs. While torture is technically outlawed in Israeli and international law, the use of "moderate physical pressure" in cases of "necessity" is permitted. This loophole is utilized to authorize the use of torture when interrogating Palestinian prisoners whom Israel claims hold information on military operations.

Further covered in the testimony was the violation of fair trial standards in the Israeli military justice system, which amounts to a war crime in international law, as well as the use of administrative detention. Administrative detention involves the incarceration (largely of Palestinian civil society actors or political activists) who are detained indefinitely without trial or charge on the basis of alleged "secret information." The case of Salah Hammouri was brought before the COI as an example of the systematic harassment of human rights defenders. Salah, a Palestinian-French lawyer and lawyer at Addameer, had been arrested on multiple occasions (the first at the age of 16) and is currently incarcerated, having spent 248 days in administrative detention to date since his most recent arrest. On 18 October 2021, Salah was informed of the revocation of his permanent residency status in Jerusalem based on a "breach of allegiance," placing him at risk of deportation. Israel's systematic use of administrative detention, which largely constitutes arbitrary detention as well as regularly amounting to cruel, inhuman, and degrading treatment, is a violation of international human rights law and contributes to a system of apartheid, a crime against humanity.

Support can be shown through amplifying our work and campaigns, both for Salah's release and, more broadly, against Israel's human rights violations #StandWithThe6.  We call on individuals of consciousness from around the world to bring attention to this blanket attack on Palestinian civil society and human rights and to immediately and urgently contact their elected officials and insist they hold Israeli authorities accountable and protect human rights in Palestine.

The final day of the public hearings is available to watch on UN Web TV.