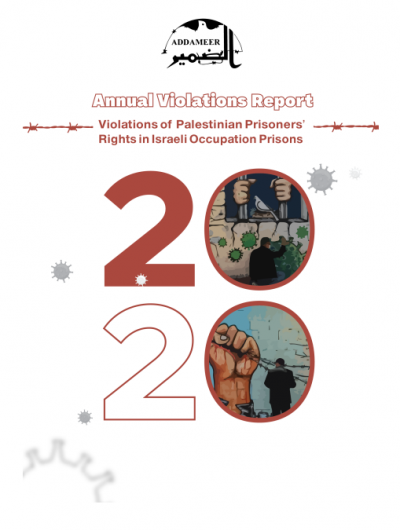 Furthermore, the outbreak of COVID-19 created a new avenue for the Israeli occupation’s violations against Palestinians, as Israeli occupation authorities denied Palestinian prisoners any contact with the outside world for months on end, using the pandemic as a pretext to ban all family visitations and forms of communication. Moreover, Palestinian prisoners were brought before the courts via videoconferencing, which repeatedly resulted in the prisoners being unable to follow along with the proceedings of their own hearings. It should be noted that the Israeli Prison Service (IPS) provided disinfectants and cleaning supplies to the prisoners at the start of the COVID-19 outbreak and attempted to reduce the number of times Israeli jailers entered the prison sections. However, over time IPS reinstated its pre-pandemic policies and reduced the number of sanitizers provided to the prisoners, resulting in a further outbreak of the virus among them due to increased contact with the prison staff.

In 2020, the Israeli occupation arrested more than 4634 Palestinians, including 543 children, 128 women, and four journalists. Additionally, six Palestinian Legislative Council (PLC) members were arrested and placed under administrative detention. In comparison, the administrative detention orders of three other PLC members who had been arrested and detained in 2019 were renewed in 2020. Moreover, 1114 administrative detention orders were issued throughout the year, including three against children and three against women. The Israeli occupation also continued its practices of arbitrary arrests against the Palestinian people: by the end of 2020, the number of Palestinians incarcerated in Israeli occupation prisons was around 4400, including eight members of the PLC, over 700 ill prisoners, and 26 prisoners who had been incarcerated since before the Oslo Accords in 1993.

The Israeli occupation’s systematic policy of medical negligence against Palestinian prisoners and detainees persisted in 2020, resulting in the death of four prisoners. Likewise, the occupation’s collective punishment policies targeting Palestinians continued as IOF demolished the houses of 6 prisoners, arrested dozens of Palestinians for leveraging their family members undergoing interrogation, and destroyed property during raids targeting the houses of numerous prisoners ’families. Moreover, the Israeli occupation imposed hefty fines against Palestinians in 2020 as Addameer alone documented fines amounting to ILS 265,3000 against 90 prisoners.

Addameer Prisoner Support and Human Rights Association publishes this annual report to document the various human rights violations against Palestinian prisoners, starting from the moment of their arrest, throughout the interrogation stage, and during transfer to and inside Israeli prisons. This report aims to shed light on prisoners’ lives and their suffering during incarceration as part of Addameer’s comprehensive efforts to document the conditions inside Israeli prisons. Moreover, it highlights the extent of Israeli violations of international conventions and agreements, particularly the Fourth Geneva Convention relative to the Protection of Civilian Persons in Time of War of 1949 and the Convention against Torture and Other Cruel, Inhuman or Degrading Treatment or Punishment of 1984. Furthermore, this report is an integral part of Addameer’s efforts to document and expose the Israeli occupation’s practices, not only pertaining to the rights of Palestinians but also entailing the entirety of the Israeli parliament’s “Knesset” policies, measures, laws, and bills targeting the prisoners in particular and the Palestinian people in general. Additionally, this report is an integral part of Addameer’s continuous efforts to seek justice and release all Palestinian prisoners in Israeli prisons. Until this goal is obtained, Addameer will persevere in its efforts, in cooperation with local and international rights eight organizations, to expose the occupation’s crimes both at the national and international levels, as well to protect and guarantee the rights of Palestinian prisoners in accordance with International Humanitarian Law (IHL) and International Human Rights Law (IHRL).

This report follows a fact-based descriptive, analytical methodology based on the data collected through Addameer’s efforts in monitoring, documentation, and legal follow-up. This is part of the association’s work in monitoring the Israeli occupation regime’s compliance—at the legislative, judicial, and executive levels—with IHL and IHRL. This is mainly regarding the prisoners and their incarceration conditions as these laws are the theoretical framework regulating the prisoners ’rights and the principles of treating prisoners. Throughout 2020 Addameer conducted 118 prison visits, during which it met with 154 prisoners in various Israeli prisons and detention centers. Moreover, Addameer documented 114 cases of the Israeli occupation’s violations against Palestinians through field visits, phone calls, or in-office meetings, during which it collected information and affidavits on violations against the prisoners during arrest, interrogation, as well post-transfer to prisons and detention centers.

This report presents the most prominent rights violations to prompt the intervention of relevant authorities and organizations to uphold their legal responsibilities to compel the Israeli occupation regime to abide by the international guarantees of prisoners’ rights. Finally, the report addresses the condition of all Palestinian political prisoners as one unified entity due to Addameer’s firm belief that Palestinian prisoners from Jerusalem, the 1948 occupied territories, the Gaza Strip, and the West Bank all share the exact cause and carry the same burden-suffering under the same horrendous conditions and fighting a joint battle for dignity and liberty.

Full report is found in the attachment above.