On Palestinian Prisoner's Day: 4,450 Palestinians are Deprived of their Liberty in Israeli Occupation Prisons 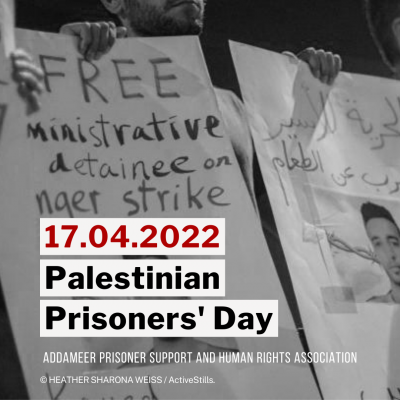 Amid the Escalation of Israeli Aggression Against the Palestinian People, 4,450 Palestinian are Deprived of their Liberty in Israeli Occupation Prisons

Since the beginning of 2022, the Israeli Occupation Forces (IOF) have arrested over 2,140 Palestinians, the majority of which took place in the occupied Palestinian cities of Jerusalem and Jenin. Arrests escalated during March 2022 and with the beginning of the Holy month of Ramadan, reaching their peak on April 15, when IOF raided Al-Aqsa mosque during dawn prayer and carried out arbitrary mass arrests of over 450 Palestinians, including many children.

Alarmingly, the scale of attacks and arbitrary arrests in Jerusalem is reminiscent of Israeli attacks preceding the May 2021 Palestinian Unity Uprising, leading to the expansion of mass arbitrary arrests and detention and heightened violence against the Palestinian people all across occupied Palestine.

The number of sick Palestinian prisoners has reached over 600 prisoners, 200 of whom have been diagnosed with chronic illnesses, including 22 prisoners with cancer and tumors of varying degrees. The most dangerous of these cases is Nasser Abu Hamid, who is in critical health as he battles lung cancer.

The number of martyrs among Palestinian prisoners has reached 227 martyrs, including the death of Sami Al-Amour due to the deliberate medical negligence—a cruel and slow killing—in addition to the hundreds of freed prisoners who died as a result of diseases they contracted within the prison. Such was the prominent case of Hussein Masalma, who died shortly after Israeli occupation authorities ordered his release after years of medical negligence by the Israeli Prison Services (IPS). The number of Palestinian prisoners who died due to deliberate medical negligence has reached 72 cases.

As part of its systematic and cruel practice of necropolitics, the Israeli occupation continues to detain the bodies of eight Palestinian prisoners who died while serving their sentence, including Anis Doula, from Ashkelon prison in 1980, Aziz Owisat in 2018; Fares Baroud, Nassar Taqtatqa, and Bassam Al-Sayeh, who passed away in 2019, Sa’di Al-Gharabli, Kamal Abu Wa’r, in 2020; and most recently, Sami Al-Amour, in 2021.

There remain 25 Palestinian prisoners who were arrested before the Oslo Accords. The oldest of them are Karim Younis and Maher Younis, who have been imprisoned since 1983, and the prisoner Nael Barghouthi, who is serving the longest detention period in the history of Palestinian prisoners as he enters his 42nd year in Israeli occupation prisons. Nael Barghouthi spent 34 consecutive years in prison before being freed in the 2011 prisoner exchange deal, only to be re-arrested in 2014.

There are currently eight Palestinian Legislative Council (PLC) representatives imprisoned by the Israeli occupation, among them Marwan Al-Barghouthi and Ahmad Sa’adat. In addition, Israeli occupation authorities continue to detain 11 journalists.

The 2021 Gilboa Prison escape was an important symbolic and practical step in challenging the Israeli occupation regime and carceral institution. In retaliation, IPS imposed a series of penalties against the six escaped prisoners, Mahmoud and Muhammad Al-Ardah, Zakaria Al-Zubaidi, Yacob Qadri, Ayham Kammaji, and Munadil Infaat), subjecting them to physical violence and deleterious conditions, which sought to isolate them from the outside world completely. Israeli occupation authorities continue their prosecution, even though their attempt to liberate themselves does not constitute a violation of the provisions of International Humanitarian Law.

Israeli occupation authorities and IPS enacted a series of illegal collective penalties imposed against all Palestinian prisoners following the Gilboa escape, including, inter alia, the lockdown of all prison sections and shutting down of the prison canteens; the complete closure of Gilboa Prison, and the forcible transfer of over 350 Palestinian prisoners to unknown locations across Israeli prisons; the large transfers of Palestinian prisoners associated with the Islamic Jihad movement, and solitary confinement of prominent political leaders; and violent raids by Israeli special forces against Palestinian prisoners in numerous prisons, most prominently Naqab Prison.

Following this, the Palestinian Prisoners’ Movement formed a “National Emergency Committee” representing every political faction, which sought to coordinate collective action and decisions undertaken between the factions. They instituted a broader program of disobedience and resistance to protest the most egregious violations enacted by IPS. This movement had escalated and waned over the past several months, reaching a climax at the beginning of February 2022 when IPS imposed a series of arbitrary restrictions to limit prisoners’ access to the prisoners’ yard, and the forcible transfer of all Palestinian prisoners so that no prisoner remains more than six months in the same cell, section, or even prison. This led to rounds of collective disobedience and negotiations, after which the Palestinian Prisoners’ Movement announced an impending mass hunger strike alongside a set of demands. Notably, the prisoners were able to achieve their demands a day before the intended start of the mass hunger strike.

Current events in Ukraine rightly bring to the fore discussions on accountability for violations of international human rights and humanitarian law. Yet, there is notable exceptionalism at play concerning States’ and third parties’ silence regarding the mounting and gross crimes of the decades-long Israeli military occupation and apartheid regime.

Now more than ever, the international community must abide by its responsibilities under international law and uphold its legal and moral commitment to reclaim and foster the protection of Palestinian human rights within the larger framework of the right to self-determination.

The international community must end its continuous silence and hold the Israeli occupation and apartheid regime accountable for the various grave breaches of international human rights law and humanitarian law to maintain international peace and justice for the sake of the Palestinian people, including Palestinian political prisoners, quest for liberty, justice, and dignity.