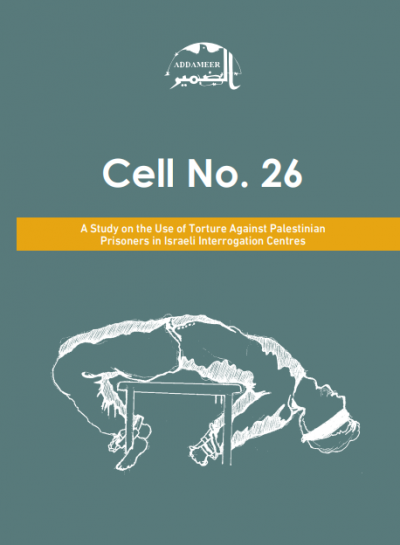 Cell 26- A Study on the Use of Torture Against Palestinian in Israeli Interrogation Centers.pdf

In this extensive study, Addameer Prisoner Support and Human Rights Association aims to tackle the concept and practice of torture broadly observed within the Palestinian context under occupation, exploring particular practices of torture documented between 2019 and 2020. The study views torture as an age-old tool of colonial systems used to subjugate and exercise control over indigenous people, repressing any form of dissent. Torture is a generic concept, so this multifaceted study explores various dimensions beyond the legal and rights-based discourse that ground this research.

This study primarily highlights European colonial practices—notably torture and general coercive and collective punishment—in African and Asian countries prior to 1960, in comparison with policies of the Israeli occupation against Palestinian detainees. The study draws parallels between the two colonial systems, concluding that the Israeli occupation’s practices do not fundamentally differ from European colonial practices in the 1920s, ‘30s, and ‘40s; both systems resorted to the deliberate use of torture against detainees, collective punishment, fines, as well as the confiscation of funds and properties to subjugate the occupied population.

This study employs several research methodologies, including legal analyses of international courts’ rulings and agreements on torture, a critical analysis of Israeli court rulings, along with a collection of in-depth interviews with torture victims coming from Addameer’s torture archive that has been underway since 2018. The interviews tackle Israeli occupation practices between 1960 and 1999 and various forms of torture practiced by Israeli occupation forces at the time. Moreover, the study leverages quantitative data analysis of the study sample, consisting of 205 cases of detainees interrogated between 1 January 2019 and 30 June 2020 and whom Addameer legally followed. The analysis examines over 25 factors, including interrogation center location, gender, the duration of interrogation, the number of detention extensions for interrogation, Preface 26 6 lawyer bans, and appeals and objections filed by Addameer on behalf of the detainees, among several other factors.

In addition to the quantitative analysis, Addameer relied on the legal analysis of a large number of case files by exploring relevant legal and court procedures of each file. Finally, Addameer reviewed all relevant prison visits and field research documentation notes conducted between January 2019 and June 2020. The study is divided into three main parts. First, it tackles European colonization and its use of torture to exercise control over and subjugate the indigenous population, presenting examples of colonial practices in numerous countries including Tunisia, Algeria, Kenya, and others. The second section attends to torture within the context of international law and courts, exploring critical international courts’ rulings and agreements on torture, the nature of practices that amount to torture, as well as what falls under ‘inhuman treatment.’

The third and most prominent part of the study addresses torture within the context of the Israeli occupation, starting with the history of Israeli torture practices from 1960 to the present day, as the historical scope of the study spans from 1967 to 2020, with a particular focus on cases followed by Addameer during 2019 and the first half of 2020. This third section additionally presents the testimonies of prisoners subjected to the most heinous torture techniques of that time. It also addresses the complicity of the Israeli judicial and medical systems and their role in concealing the Israeli occupation’s crimes