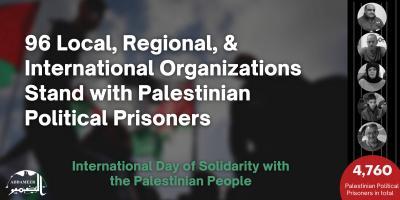 This International Day of Solidarity with the Palestinian People, Addameer calls on the international community to demonstrate support for Palestinian political prisoners, both directly with the actions of the Palestinian Prisoner Movement, as well as through demanding an end to the Israeli occupation authorities’ arbitrary policies and practices of deprivation of liberty; administrative detention, inhumane prison conditions and a crackdown on civil society activism, all of which serve to construct and maintain the Israeli apartheid regime.

As recent Israeli elections recorded a swing to the far-right and the targeting of activists and peaceful protesters has vastly increased, the conditions for Palestinian prisoners mirror those on the ground. Currently, 4760 Palestinian political prisoners are held in Israeli occupation prisons, including 160 children and 33 women. Of that number, 820 are administrative detainees, held without charge or trial based on undisclosed "secret information," four of whom are children, and three are women.

Over the last two years, Addameer has documented a significant and rapid increase in Israel's use of administrative detention, not only as a tool to quash legitimate civil resistance and civic work against the Israeli settler-colonial and apartheid regime but as a form of control and intimidation over the Palestinian people as a whole. Palestinian political prisoners and detainees from within prisons have used the tools available to them to stand up against the systemic discrimination and violation of their basic rights, engaging in individual and collective hunger strikes, abstentions from medical treatment, and a collective boycott of military courts.

The impunity with which Israel is able to commit systematic human rights violations must end, before we fail to protect the Palestinian people, including prisoners. Amidst an aggravating political climate, the situation for Palestinian prisoners is only worsening. Addameer seeks to amplify the Palestinian Prisoner Movement’s demands to end Israel’s systematic and widespread reliance on administrative detention on the international stage; without this work, Israel's regime will further isolate and silence the voices of Palestinian prisoners. Vocal international solidarity with the movement is urgent and essential. It should further extend not only to the civil society organisations who work to document and amplify the struggles of prisoners but through condemnation of Israeli apartheid and its use of administrative detention as a method of oppression.