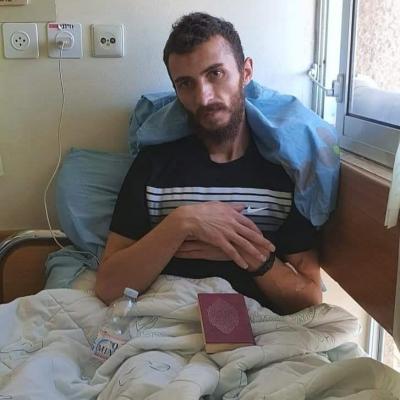 Ghadanfar Abu Atwan, a 28-year-old Palestinian, was arrested in October 2020 and placed under administrative detention for six months, an order that was renewed for an additional six months. In protest, Ghadanfar began an open-ended hunger strike on 5 May 2021 while being held in Ramon prison, whereupon he was transferred to solitary confinement for 14 days, and later subjected to physical assault, beatings, and injuries without any regard to his medical condition. Since then, his medical condition has rapidly deteriorated, requiring urgent medical intervention.

After fifty days on strike, Ghadanfar was transferred to Kaplan Medical Center, where he continues to be held as he falls in and out of consciousness, facing an imminent threat to life. According to medical reports issued on 21 June 2021, doctors confirmed that Ghadanfar’s current condition could lead to three serious possibilities: paralysis, a chronic health condition difficult to treat later, or sudden death. Still, on 4 July 2021, Ghadanfar announced his strike from drinking water in response to the refusal of Israeli military courts to end his arbitrary administrative detention.

Despite the multiple appeals submitted by his lawyers against the administrative detention orders and their renewals, Israeli military courts rejected all appeals, including the most recent appeal hearing on 31 May 2021.

Noting, with grave concern, the imminent threat to Ghadanfar’s life, and Israel’s Israel’s ongoing and systematic policy of administrative detention, and ill-treatment, the urgent appeal urged the UN Special Rapporteurs to intervene immediately, and specifically to: