199 human rights network and organizations hold the occupation state fully responsible for the lives and safety of the prisoners who liberated themselves from Gilbo'aprison and were re-arrested, and demand the formation of an independent international inv 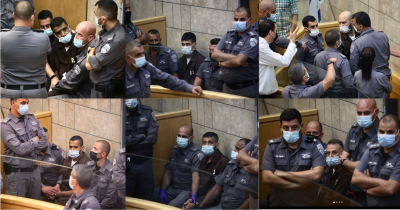 The undersigned human rights institutions consider with great seriousness the testimonies of the lawyers of the re-arrested prisoners who succeeded in liberating themselves from the Israeli “Gilboa” prison. They are: (Mahmoud and Muhammad Al-Ardah, Zakaria Al-Zubaidi, YacobQadri, Ayham Kammaji, Munadil Infaat ). According to the testimony of lawyers, the Israeli occupation forces assaulted them harshly from the moment of arrest, causing multiple bodily injuries, which necessitated hospitalizing some of them due to the difficult condition as a result of the use of unjustified violence and crimes of torture against them. They are also deprived of sleep, and interrogated after being completely stripped, according to the information provided so far, some of them have been threatened with death by interrogators, and their relatives have been arbitrarily arrested for the purposes of revenge.

There are also the practices aimed at breaking their resolve and will, and in clear violation of the provisions of international humanitarian law and international human rights law and their established principles related to persons deprived of liberty and the right not to be subjected to any forms of torture, humiliating, cruelty, and ill-treatment, in particular Article (5) of the Universal Declaration of Human Rights Articles (7, 9, 40) of the International Covenant on Civil and Political Rights, Articles (12-32) of the Third Geneva Convention of 1949, and Articles (90-98) of the Fourth Geneva Convention of 1949, and the Convention against All Forms of Torture and Other Forms of Cruel Treatment, or Degrading Treatment, and General Assembly Resolution No. (30/D/3452) of 1975 guaranteeing the protection of all persons from being subjected to torture and other cruel, inhuman or degrading treatment or punishment.

The human rights organizations stress that the colonial occupation and the racist apartheid regime in itself is a crime, and escaping from its prisons is motivated by the desire for liberation and emancipation and out of national dignity as well as a moral duty, heroism and honor that are protected by international conventions and covenants, whether the Brussels Declaration of 1874 or the Hague Convention of 1907 or my both Third and Fourth Geneva conventions, which has followed the example of many democratic countries, in addition to criminalizing torture against all persons and at all times expressly prohibiting torture of prisoners/detainees who take their freedom from prisons in particular, and suffice with the punishment for escape that causes damage to property and lives, which would be more stressed as the existence of the entire occupation and its prisons is an ongoing crime.

It should be recalled that the continued detention itself contradicts the essence and explicitness of Article (118) of the Third Geneva Convention on the Release of Prisoners of War, which necessitated their release without delay, which places a special responsibility on the Palestinian parties that signed The Oslo Accords but failed to compel Israel, the occupying power, to carry out its minimum duties, as the occupying country picked up this omission and historical mistake by ignoring the issue of prisoners in the settlement negotiations, by turning the prisoners’ file into a pressure card and political blackmail, and transforming their immediate release from a legal duty to an international mandate imposed on the occupying power to release them according to their desire under the name of “goodwill gestures”, the harm of which is magnified by accepting the geographical, temporal, and partisan division of prisoners on the basis of character and “harm”, and accepting their division into prisoners of the West Bank, prisoners of the Gaza Strip, and prisoners of Jerusalem, prisoners of 1948, the Arab prisoners, the prisoners classified as “blood on their hands” and other miserable classifications.

While human rights institutions condemn in the strongest and most severe terms the complete disregard for all these treaties, agreements, and charters, by continuing “Israel”, the occupying power, to follow systematic procedures and long-term policies at the executive, legislative, and judicial levels that lead to a systematic violation of the rights of detainees and prisoners in Israeli prisons within a colonial vision, which extended, in part, to their right to physical integrity and freedom from torture, and their right to guarantees of justice and health care. Human rights organizations stress that the suffering of detainees and prisoners has prompted them to use their empty stomachs to engage in open hunger strikes in protest against the widespread repression practiced against them, of which the Israeli Prison Service is an active part.

Attention must be drawn to the care of the law, as "Israel", the occupying power, is the only country, along with the United States, that has officially legalized torture. In 1987, the Knesset approved the recommendations of the Landau Committee, and the recommendations of the Israeli officers and interrogators authorized the use of torture under the name of “physical pressure/enhanced interrogation,” while the Israeli Supreme Court issued Resolution No. (94/5100) in 1999, which confirmed the use special means of “physical pressure” in the event of an imminent security threat, to return in 2018 and expand this to include cases that do not constitute an imminent security threat, in a very clear confirmation of the integration of the pillars of the colonial system, including the legislative and judicial authorities.

While detainees and prisoners are subject to multiple and systematic methods of torture resulting from a policy of structural, legislative, practice and cultural violence against them, including ghosting, severe beatings, electric shocks, opening cold or very hot water with fluctuating air currents, sleep deprivation, suffocation, and waterboarding, burning of skin, shaking, that interrogators hold and shake the detainee regularly, vigorously, and very quickly until the detainee faints as a result of concussion, sleep deprivation, crucifixion of the detainee upside down, psychological torture using threats, solitary confinement, denial of visitation, and other brutal torture practices and that a number of prisoners and detainees did not survive to tell what happened, and those who survived were left with psychological trauma, physical pain, and permanent disabilities,

The human rights organizations stress that the Israeli colonial self’s view is degenerate, lofty, and above the law, and the policy of impunity, is an essential part of the continuation of these practices without regard, which requires confronting it firmly and sternly by bringing the criminals to justice and redressing the victims, and makes the international official silence a direct partner.

Based on the foregoing, the Palestinian and Arab human rights organizations, undersigned below, recommend urgently the following: