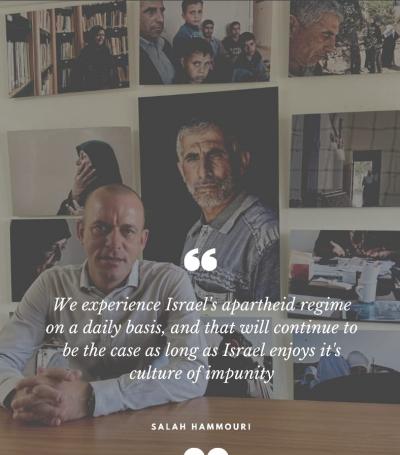 On 26 December 2021, the Israeli High Court issued a decision rejecting the appeal to suspend procedures regarding the permanent residency revocation and forced deportation of French-Palestinian human rights defender and lawyer Salah Hammouri. The ruling aligns with that of the Jerusalem District Court, on 21 November 2021, following appeals submitted by Salah Hammouri's defense counsel, HaMoked Center for the Defense of the Individual and Adv. Leah Tsemel on the Israeli Interior Ministry's arbitrary and punitive decision to revoke Hammouri's permanent residency status in Jerusalem due to "breach of allegiance to the State of Israel."[1]

The Israeli Interior Ministry's official revocation of Salah Hammouri's permanent residency, on 18 October 2021, follows the Israeli occupation and apartheid regime's longstanding harassment campaign against him and his family, including previous arbitrary arrests, banning from entering the West Bank for almost 16 months, and the deportation of his wife, Elsa Lefort, a French national, separating him from his wife and son in 2016.[2]

Since the revocation, Salah Hammouri's defense counsel submitted an appeal against the residency revocation, along with a petition to suspend the procedures associated with the residency revocation—most prominently the travel ban and halting of residency social security and insurance benefits. Nevertheless, on 14 December 2021, Salah Hammouri received a letter from the Israeli National Social Security Agency notifying him of the termination of his national and health insurance claims due to his "leaving the country" and lack of "proof of residency."

In the 26 December 2021 decision rejecting the appeal to suspend the procedures of the residency revocation, the Israeli High Court cited "secret information" provided by the Israeli Interior Ministry, which determined that Salah Hammouri continues to pose a "security threat" and "aggressively" pursues such activities. The withholding and use of "secret information" in and by Israeli civil courts—the Jerusalem District Court and Israeli High Court—mirrors the Israeli occupation's administrative detention practices, in stark violation of fair trial standards, which place Palestinians under indefinite detention based on secret material that cannot be disclosed to the detainees or their lawyers.

Salah Hammouri's case evidences the Israeli occupation and apartheid regime's widespread and systematic practice of illegal population transfer and demographic manipulation, as manifested through laws, policies, and practices, to maintain their institutionalized regime of racial domination and oppression over the Palestinian people.[3] This includes the cornerstone 1952 Entry into Israel Law, concerning the entry of non-citizens into Israel, which grants preferential treatment to Jewish immigrants under the Law of Return while imposing the precarious "permanent resident" status on Palestinians in occupied East Jerusalem.[4]

Since 1967, the Israeli occupation regime has revoked the residency of more than 14,500 Palestinians.[5] In the past decade, occupation authorities have gradually expanded the criteria for revoking residency rights to include granting authority to the Ministry of Interior to revoke Palestinian residency rights on arbitrary and punitive grounds. Specifically, the forced transfer of protected Palestinians from occupied East Jerusalem is considered a war crime under Article 8 of the Rome Statute of the International Criminal Court and a grave breach of Articles 49 and 147 of the Fourth Geneva Convention.[6] Further, the widespread, systematic, and interrelated discriminatory policies and practices of forced displacement and segregation contribute to the broader crime against humanity of apartheid,[7] as is most recently reiterated and established in Amnesty's landmark report on Israeli apartheid.[8]

[7] International Convention on the Suppression and Punishment of the Crime of Apartheid, 30 November 1973, A/RES/3068(XXVIII), available at: https://www.refworld.org/docid/3ae6b3c00.html

[8] Amnesty International, “Israel’s apartheid against Palestinians: a cruel system of domination and a crime against humanity,” 1 February 2022, https://www.amnesty.org/en/latest/news/2022/02/israels-apartheid-against-palestinians-a-cruel-system-of-domination-and-a-crime-against-humanity/

02-02-2023
In a Joint Submission to the UN Commission of Inquiry, Palestinian Organizations Highlight Israeli Policies to Entrench and Maintain its Settler-Colonial and Apartheid Regime
24-01-2023
Commemorating the International Day of Education by Highlighting the Reality of the Right to Education for Palestinian Political Prisoners
01-12-2022
Urgent Intervention Needed as French-Palestinian Human Rights Lawyer Salah Hammouri Faces Imminent Forcible Deportation under “Breach of Allegiance”