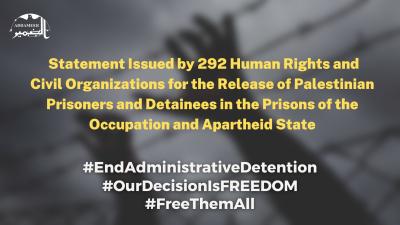 Statement Issued by 292 HR and CO for the release of Palestinian Prisone....pdf

The undersigned human rights and civil institutions condemn in the strongest terms the continued detention by "Israel," the military occupation state, of about (4,650) prisoners distributed among about (23) prisons and detention centers. Among the prisoners, there are (32) female and girl captives, about (180) minors under the age of eighteen years, and (780) administrative detainees, including two female prisoners and four children. There are also (600) prisoners suffering from various diseases, of whom (22) have cancer. This is in addition to (549) prisoners who were sentenced to life imprisonment once or several times.

Civil and human rights organizations call on the international community, led by the United Nations, the International Committee of the Red Cross, and the Working Group on Arbitrary Detention, to pressure the occupation and apartheid entity to end the file of administrative detention and stop its use against Palestinians. Thus, it violates one of the most important fair trial guarantees in light of the concealment of information from the detainee and his lawyer and the possibility of extending his administrative detention indefinitely without the detainee knowing his accusation.

Civil and human rights organizations and institutions affirm that the continued detention of Palestinian prisoners, which constitutes a grave violation of international humanitarian law, especially the Third and Fourth Geneva Conventions on the treatment of prisoners of war and detainees, is also a war crime according to Article 85, Paragraph 5 of Protocol I to the Geneva Conventions, and in accordance with Article 8 of the Rome Statute of the International Criminal Court.

It also affirms that what Palestinian prisoners and detainees are subjected to in terms of arbitrary arrest, physical and psychological torture, and cruel, inhuman, and degrading treatment and punishment, flagrantly violates international human rights law, especially the Convention against Torture (1984-1987), as well as the standards adopted by the Working Group on Arbitrary Detention.

Human rights and civil institutions condemn the policy of medical neglect and apartheid pursued by the occupying state against Palestinian female prisoners and detainees and the policy of torture and solitary confinement in cells lacking the minimum conditions of human life, depriving the families of prisoners of their visits, and the systematic abuse and torture of male and female prisoners.

The human rights and civil organizations that signed the statement stress the need to:

13-11-2022
Addameer Submits Testimony during the Commission of Inquiry on the oPt and Israel's Public Hearings
09-11-2022
Palestinian Organisations to COP27: Climate Justice Demands Free Civic Climate Space
13-11-2022
Addameer Sends a Submission to the United Nations Special Rapporteur on the Situation of Human Rights in the Palestinian Territories Titled “Illegal and Arbitrary: The Deprivation of Liberty of Palestinians in Occupied Territories”
متوفر باللغة العربية