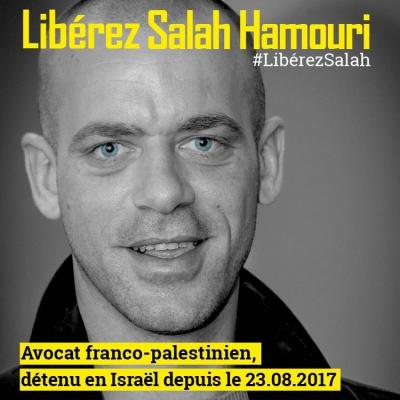 An appeal hearing for Addameer's field researcher and human rights defender Salah Hamorui has been set for 22 October 2017 at the Israeli High Court in Jerusalem. The appeal will challenge the grounds and process of Hamorui's initial administrative detention.

On 29 August 2017,  a six-month administrative detention order was issued against Hamouri but, on 5 September 2017, the order was replaced with three months (the remainder of his former sentence from when he was released in the 2011 Wafa al-Ahrar prisoner exchange). On 14 September 2017, Hamouri's administrative detention order was reinstated after the Israeli High Court accepted the prosecutor's appeal not to reissue the three-month sentence.

Administrative detention, as a policy, is used by the occupying power to suppress Palestinian resistance through the arbitrary detention of those who use political and human rights-based means to struggle for dignity and self-determination. This detainment is but one of many where the occupying power has attempted to stifle the legitimate pursuit of Palestinian human rights and basic dignity. For those who dare to speak up against this oppressive colonial regime, arbitrary detainment awaits.

Addameer considers administrative detention to be a form of arbitrary detention which amounts to psychological torture. As a result of being held indefinitely without charge or trial, the detainee may develop a psychological disorder, long-term depression, and chronic anxiety associated with the element of unpredictability.