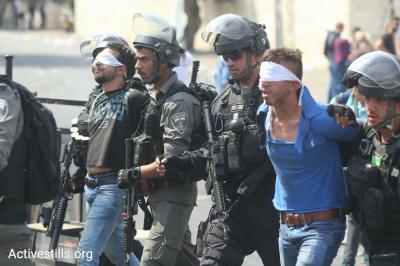 Palestinian prisoners’ affairs institutions – the Palestinian Prisoners’ Club, Addameer Prisoner Support and Human Rights Association, Committee of Prisoners' Affairs and Al-Mezan Center for Human Rights – issued the following report on 8 July 2017, which indicates that, during the month of July 2017, Israeli authorities arrested (880) individuals from the occupied Palestinian territories, including (144) children, and (18) women.

According to the monitoring and documentation conducted by the four organizations, Israeli occupation forces arrested 425 Palestinians from Jerusalem, 120 from Hebron and 85 from Nablus. In addition, 49 Palestinians were arrested from Jenin governorate, 47 from Qalqiliya, 45 from Bethlehem, 37 from Ramallah, 36 from Tulkarem, 10 from Tubas, 10 from Jericho, and two from the Gaza Strip.

In the month of July, the occupation authorities issued 97 administrative orders, of which 20 were new orders and 77 were issued for prisoners for the second and third time.

The full report is divided into four sections. The first section provides statistics on the number of arrests made in July; the second section highlights the arrest and detention of PLC members; the third deals with the arrests of Palestinians following Al-Aqsa uprising. Finally, the fourth section deals with the condition of prisoners suffering from psychological illnesses.

The four organizations strongly condemn Israel's gross and systematic violations of international law, and its disregard for the rights of Palestinian detainees. We also condemn the continuing occupation authorities' disregard of the legal guarantees provided by international legal regulations, particularly the Standard Minimum Rules for the Treatment of Prisoners 1955, and other international declarations and conventions guaranteeing the rights of prisoners and detainees.

The four institutions also call upon the international community to intervene urgently in regard to the fulfillment of its legal and moral obligations towards the population of the occupied Palestinian territories and to take effective measures to compel the occupying state to ensure respect for their basic human rights. We also call upon local, regional and international groups and allies to activate solidarity campaigns with prisoners, with the aim of putting pressure on the occupying state.