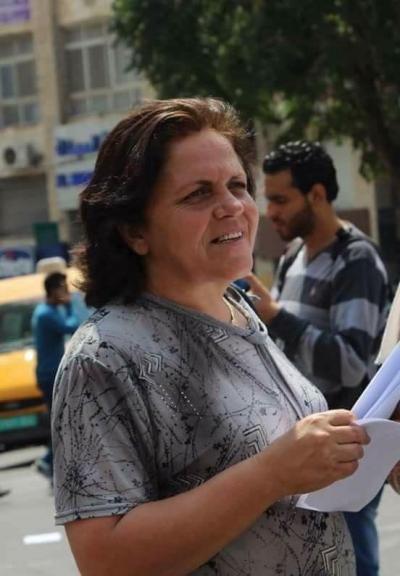 On 8 November 2020, the military commander issued an administrative detention order against Khitam for 6 months, ending on 1 May 2021. A confirmation session was held on 11 October 2020, where the judge claimed that the military commander issued the administrative detention order due to Khitam’s active work in the banned Popular Front for the Liberation of Palestine, thus posing a threat to the security of the region.

Khitam is currently held under administrative detention in Damoun prison with the rest of the Palestinian female prisoners.

On the morning of 2 July 2017, Khitam and her family were awoken at around 2:30AM by the sound of banging on the door. She opened it, and the Israeli Occupation Forces entered the house without explanation. The soldiers held her in a room where, after a female soldier searched her, an officer came and started asking her questions. Following a brief interrogation, she was told that they were there to arrest her. No warrant was produced, nor was a reason given. Khitam changed her clothes and said goodbye to her husband only, thinking that her daughter Amal was still asleep. However, Amal was awake and heard the soldiers ask about Omar (her brother) many times, so she thought they were to arrest him instead of her mother. Amal recounted the experience, “I did not know what to do, I was in my room changing my clothes in order to get out and see what was going on, but the arrest process took only fifteen minutes. By the time I got out of my room, my mother was already taken.”

The soldiers took her to the military vehicle outside her home, where she was shackled and forced inside. Khitam reported that the vehicle stopped twice while she was in it (later she found out that they stopped to arrest PLC member Khalida Jarrar, and Mr. Ihad Masoud). More than an hour later, the soldiers informed her that they had reached Ofer military base. She was kept waiting for two hours in a small room until the prison doctor came to test her blood pressure and pulse. Another hour passed until Khitam’s interrogation began. Finally, following an hour of interrogation, then they took her fingerprints, DNA and photos and she was transferred to HaSharon prison.

Khitam is known for her commitment to equality for women, and her activities as a social worker. She has been the president of the Palestinian Women Union Committee since 2010, a member of the General Union of Palestinian Women General Secretariat, and a member of the Regional Coalition for Women Human Rights Defenders in Middle East and North Africa. She has been an outspoken advocate in regard to civil and political rights for, with an emphasis on the basic rights of women. As such, Khitam has been a voice for underprivileged Palestinian women in regard to social issues on the national level. Khitam believes that the freedom of women is parallel to the freedom of the Palestinian people.

Away from her family

Amal, Khitam’s oldest daughter, recounts that “the hardest part about my mother’s detention is that we can’t get used to her absence! She was only detained once for a day in the eighties. We have never lived this experience before, and my father’s last arrest was in 1993.” Amal added, “my mother has high spirits despite the detention. She fills her time in the prison by reading and teaching younger female prisoners. She has been able to adapt with her detention.”

Khitam is married to Mr. Ali Fares, who has been detained by the occupation forces multiple times. She is a mother of three; Amal, Dina (who is married and has a daughter, Jana- Khitam’s first granddaughter), and Omar, the youngest who is currently studying abroad.

Her husband and two daughters were allowed to visit her for the first time on 4 September 2017. During the visit, she kept asking about Jana, expressing how much she misses her and being with them. On 18 September 2017, Khitam’s daughters visited her again and she told them that she spends her time reading and teaching, asking them to bring books whenever they can.

Khitam is currently held at HaSharon prison with other female prisoners, who are distributed between HaSharon and Damon prisons. She is living with four other women in one room and teaches the young girls Mathematics, science and  management, in order to help them pass the Secondary School Examinations (Tawjihi).

Khitam has continud her role as a mentor, and social worker inside the prison. She encourages the young prisoners to continue their education and develop themselves conditions in order to achieve their ambitions when they are released.

Khitam is supposed to be released on 1 October 2017. However, being under administrative detention makes her detention period renewable unlimitedly. Despite that, she keeps her spirits high and is ready to face the future, freed or renewed, she will remain strong.

Khitam Saafin was arrested from her home in Betunia near Ramallah. On 5 July 2017, three days after her arrest, she was brought to Ofer military Court from HaSharon prison. As a result of the hearing, her detention for 72 more hours in order to explore the possibility of issuing an administrative detention order. On 9 July 2017, a three-month administrative detention order was issued against her. It was confirmed by a military court on 12 July 2017. The military prosecution claimed that Khitam is an active member of the Popular Front for the Liberation of Palestine (PFLP), and requested that the court confirm the three-month order based on this accusation. Her lawyer denied such claims, stating that she is a mother of three children, has never been arrested, and that there is no logic behind such claims. The lawyer also informed the court that Khitam used to be a teacher, and that all of her activities fall within her role as either a teacher or a social worker. In addition to this, she was at no time interrogated or questioned about any of her activities or affiliations. Based on his statement, the lawyer requested the cancellation of the administrative detention order.

The judge agreed on the fact that she was not interrogated about the information in her secret file, and that it was not enough to prove the claims against her. However, he stated that the information in the secret file confirmed that she is an active member in PFLP and plays a leading role within the political party. As such, the order was confirmed.

Khitam’s file clearly shows that the court does not legally review the administrative detention orders issued by the prosecution; but it just reviews the secret information and confirms the orders without investigating the data. Meaning that, despite the judge’s statement that Khitam’s interrogation did not conform the material against her, he decided to confirm the order without giving the detainee her right to defend herself and without investigating the truthfulness of the prosecution’s claims.