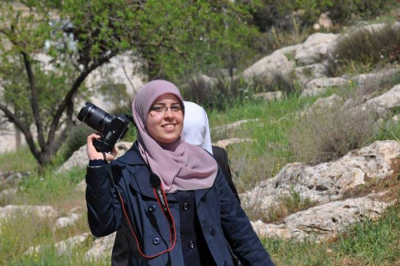 Still, the IOF re-arrested Bushra on 9 November 2020 while she was passing through a military checkpoint, and an administration order was issued for four months against her. Before the end of the first order, on 7 March 2021, the Israeli occupation renewed the administrative detention order for an additional four months, which still could be renewed indefinitely.

Bushra was arrested from her house in Um al-Sharyet on the night of 1 November 2017. This would be the third time that she had been arrested. During the arrest, the Israeli occupation forces searched the house, damaged the family’s belongings, and confiscated money. Additionally, family members were interrogated during the search. Bushra was searched before being taken to the jeep.

On 6 November 2017, Bushra received a six months administrative detention order. During the confirmation hearing, this was reduced to four months. However, in February 2018, Bushra's the order was renewed for another four months. It is meant to end in July 2018.

Administrative detention is a procedure that allows the Israeli authorities to hold prisoners indefinitely, based on secret information without charge or trial.

On 6 July 2011, Bushra was first arrested at the age of 18. She was sentenced to 16 months but was released 5 months later as part of the 2011 Wafa al-Ahrar prison exchange deal. Despite this, the Israeli occupation forces continued targeting Bushra. She was again arrested on 2 July 2014 and was made to serve the remainder of her previous sentence. On 17 May 2015, after ten and a half months, Bushra was released.

Bushra lives with both of her parents and has three brothers. They have been targeted and harassed by the Israeli occupation forces for a long time, as both her parents have been detained multiple times over the years. Her father, Jamal al-Taweel, was arrested several times and spent in total around 14 years in detention. Bushra’s mother was also arrested on 8 February 2010. She spent a year in detention and was released on 1 February 2011.

Bushra’s family have also experienced different forms of persecution in addition to arrest. Most of the family members are banned from holding an entry permit to Israel, which means they are unable to visit detained relatives. In fact, Bushra's mother, father, and brother are all banned from obtaining permits and cannot visit her.

In 2013 Bushra graduated from the Modern University College in Ramallah where she studied journalism and photography. Immediately after graduating, Bushra started working at Aneen al-Qaid Network which is a social, cultural and media network that aims to raise awareness about the rights of detained persons. This network was established on 29 June 2013 by a group of ex-detainees. Bushra is the official media spokesperson representing the network and she also took the lead in organizing several of their events. Bushra is considered a human rights defender, as she documents the continued violations committed against Palestinian prisoners and organizes different events that aim to raise awareness about their rights and support them and their families.

The UN Declaration on Human Rights Defenders defines a human rights defender as an individual who plays an important role in furthering the cause of human rights through activities such as the documentation of violations, providing support and assistance to victims seeking remedy, combating cultures of impunity, and mainstreaming a culture of human rights and information on an international and domestic level. Human Rights Defenders in the occupied Palestinian territory face various types of harassment and rights violations by the occupation forces irrespective of the protection afforded to them under international conventions.

Since Oct 2015, the occupation forces have intensified the persecution of human rights defenders in the occupied Palestinian territory, aiming to silence them and punish them for their role in exposing violations and crimes perpetrated against the Palestinian people.

Despite a lack of evidence or independent witnesses, and the vague or empty basis of the charges levied against human rights defenders, the vast majority of activists will be found guilty of committing a “security offense” and sentenced to a term of imprisonment. In the Israeli military courts, the accused’s inalienable right to due process is never upheld. Soldiers’ testimonies and, occasionally, photos of individuals at a demonstration, are very often sufficient for an individual to be found guilty of an offense under the military orders that govern the West Bank. Moreover, if the detainee has been coerced into signing a confession, they will invariably be sentenced and serve time in a military prison.

Throughout the year 2017, the Israeli occupation forces arrested 25 Palestinian journalists. The year ended with 22 detained journalists.

In the occupied Palestinian West Bank, the Israeli army is authorized to issue administrative detention orders against Palestinian civilians on the basis of Military Order 1651. This order empowers military commanders to detain an individual for a period of up to six-month, which can be renewed indefinitely if they have “reasonable grounds to presume that the security of the area or public security requires the detention.” On, or just before the expiry date, the detention order is frequently renewed. This process can be continued indefinitely.

This practice of arbitrary detention is a grave violation of international law and human rights standards particularly articles 78 and 72 of the Fourth Geneva Convention which states that an accused individual has the right to defend him or herself. This also violates Article 66 of the Fourth Geneva Convention and the basic standards of fair trial.

Addameer believes al-Taweel's detention violates international fair trial standards, since administrative detention orders are based on secret information. As a result of the ‘secret’ nature of the information, her legal representatives are unable to fully address the prosecution’s argument that al-Taweel constitutes a ‘security threat’.

Human Rights Defender Bushra al-Taweel has been subjected to continuing adversity imposed by the occupation forces. She was first arrested at 18 years old and was released from her second arrest in May 2015 after serving almost a year in detention. Now, Bushra is imprisoned under administrative detention. She will, hopefully, be released in July 2018 after spending 8 months without having any charges brought against her and without having the opportunity to stand trial.