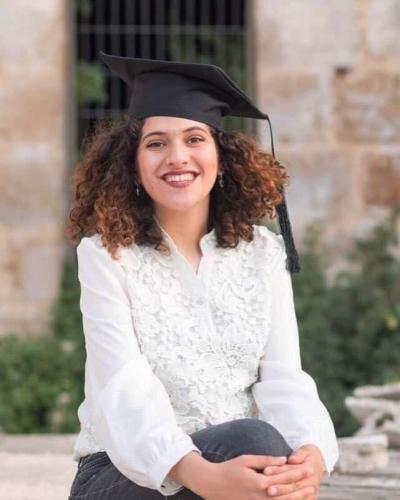 On 3 March 2021, Ofer military court sentenced Layan to 16 months imprisonment, another 12 months suspended over five years, in addition to a fine of 6,000 shekels. In the ruling, the military judge cited a previous ruling by the military appeals court which stated that student arms of organizations deemed unlawful should not be underestimated, referring to the prosecution of students who belong to student groups in universities, as they constitute a threat to “security.”

Layan Kayed was arrested on Monday morning, 8 June 2020, while crossing Za’tara military checkpoint with her mother. The Israeli Occupation Forces (IOF) stopped the car of Layan’s mother; Layan was asked for her ID. Once she handed it, she was ordered to step out of the vehicle and searched on the spot. Layan was informed that she was under arrest through a phone call with an Israeli Security Agency (Shabak) officer. The Israeli soldiers cuffed her hands in front of her body, shackled her legs with iron leg-cuffs, and seated her on a chair in an open area. After a while, she was transferred into a nearby military compound for a medical examination. Throughout the procedure, Layan was questioned on her health condition without any access to interpretation aid. After having her questioned, she was transferred back to the checkpoint where the soldiers provided her with food and water. Still, she remained handcuffed through it all even when she had to use the toilet. From the checkpoint, Layan was transferred again by Bosta to HaSharon Prison on a three-hour ride without water under the excuse that no water was available.

Whilst at HaSharon, Layan suffered harsh conditions in a section shared with “security prisoners” and civiLayan prisoners. The latter used to keep screaming and breaking things, causing a continuous source of stress. Moreover. she was subject to cursing for four days, the prisoner guards were able to hear the cursing, yet they did not interfere to prevent the ill-treatment.

Layan was moved to another chamber brimming with cameras before she was moved again to another one. The detainee was not provided with a new or clean uniform; thus, she had to borrow clothes from a civiLayan inmate, clean them, and put them on. Layan had low-quality blankets. Although she requested that they be cleaned, yet the prison administration gave a deaf ear to her demand. The food, as well, was poor in terms of quality and quantity. As for the toilet, it had neither a ceiling nor a door.

Layan was interrogated twice. For that purpose, she had to be transferred, shackled, from HaShron Prison to Ofer Prison by Bosta, – a process that started in the early morning and lasted up to evening. In both rounds, she was interrogated with her hands and legs cuffed. As for the questions, they were centred on her activism as a student unionist at the university.  After one of the rounds, Layan was detained in a cell for long hours. Despite her repeated demand for water and permission to use the toilet, she was denied the former, and when she was allowed to use the bathroom, a female soldier refused to remove the cuffs.

At the end of the interrogation and as Layan was inching her way to climb the Bosta, to be transferred to the HaSharon Prison, she fell due to the cuffs hindering her movement. None of the male and female soldiers offered her help; instead, they mocked and made fun of her.

Layan was brought before Ofer military court two days after her arrest in order to extend her detention for five days, and then again for an additional four days her detention was extended. On Thursday, 18 June 2020, the indictment was submitted against her over, among others, her activism as a student unionist at the university. It also charged her with establishing an unlawful association, holding social and cultural activities, and throwing stones at the IOF.

Layan is still detained at the Damon Prison looking forward to her trial on 31 August 2020.

The Student Union Activism and the Detention of Female Students

In a constant effort to render students’ activism as an activity that threatens the regional ‘security’, the Israeli occupation authorities pursue Palestinian students, summoning some, and arresting others. As the figures stand, five out of the 41 female Palestinian prisoners at the Israeli Damon Prison are students under interrogation – one of whom is a postgraduate student. These five detainees were tried on charges related to their activism as university student unionists.   In such a vein, the Israeli occupation authorities often accuse female students over student activities, claiming such acts pose security risks. Three of the detained female students are still marking time at the Damon Prison to be sentenced. Another is serving her 16-month imprisonment; the fourth is still under interrogation at the Petah Tekva Detention Centre, denied her right to consult with her lawyer.

The persecution of female students under the pretext of their activism as student unionists lays the Israeli Occupying Power bare, quashing its attempts to render itself as a democracy. As an Occupying Power, Israel prevents and oppresses any attempt by students to put their basic rights into practice, including their freedom of expression and participation in political life.

Such systematic violations are devised to oppress and intimidate the Palestinian students into refraining from exercising their internationally protected right to participate in union activities and freedom of political association, opinion, and expression.

In fact, the right to association stands to be a basic human right and is construed as the right of individuals to organise associations with persons that share a mutual opinion as well as join an established association. This right, furthermore, entails the collective right to associations to conduct activities and act in the mutual interests of their member or the subjects, individuals, or groups, for whom they work.1 Of note, the freedom of association and peaceful assembly shall be exercised without any constraints unless the International Law, particularly the international human rights law otherwise indicates.2 Although the international conventions and treaties safeguard this fundamental right, the Israeli occupation authorities go on infringing it by denying many students of their freedom of conducting and participating in student and union activities.

Layan: An Honour Student Denied the Joy of Graduation!

Layan, a middle daughter of a family consisting of two parents, two brothers, and three sisters, is an honour student. With a 96 average in the General Secondary Education Certificate Examination, she enrolled in the Birzeit University sociology bachelor degree programme. Full of energy and a persistent glimmer of a smile, Layan has never excluded herself from her community and always extends her hand to help. Once completed the graduation requirements, Layan was a stone’s throw from sharing the joy of graduation with her beloved ones. She was arrested before receiving her certificate that sums up a hard-won four-year academic journey. This aspiring spirit was thrown into an Israeli occupation prison and is awaiting a sentence under the pretext of participating in student union activities. 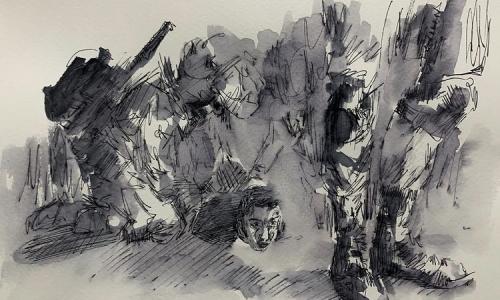