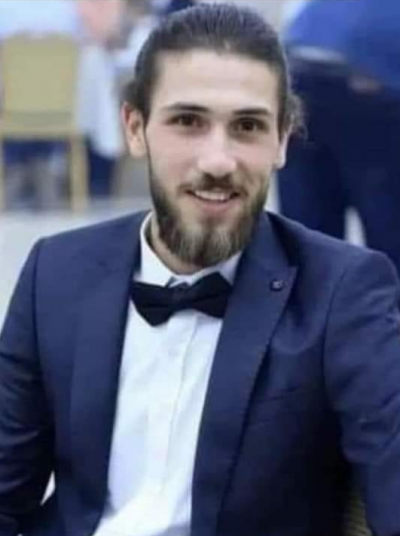 Israeli Occupation Forces stormed Wissam Khatib’s home in Hizma on 22 February 2021, at about 4 in the morning, breaking the glass veranda before storming the house's rooms as the family was asleep without wearing masks.

The IOF soldiers violently shook Wissam to wake him up, allowing him only to change his clothes without saying goodbye to his family. Wissam was handcuffed with plastic cuffs, blindfolded with a piece of cloth, and moved on foot until they reached the military jeeps.

Wissam was transferred to Etzion detention center, where he was held in harsh conditions for 14 days of quarantine before transferring to Ofer Prison.

On 1 March 2021, a hearing session was held to present an indictment against Wissam. The military prosecution presented a list that included a charge that the detainee “tried either by speaking or by another act to influence public opinion in the region in a way that harms the safety of the public.” This was apparently done through a post on his personal Facebook page that allegedly promoted incitement, harmed regional security, and calls for violence.

During the hearing, the military judge decided to release Wissam under the following conditions: a financial guarantee of 5000 shekels; the signature of two guarantors to guarantee an additional 10,000 shekels each; along with the requirement that Wissam is on call to return by necessity through his lawyer, and that is considered official notification. In addition, the military prosecution requested a 72-hour extension of Wissam’s detention to examine the possibility of issuing an administrative detention order against him. The military judge complied with the request and extended his detention, claiming that after examining a secret file, he found that there was reason to consider the request of issuance of an administrative detention order and that the circumstances justified the extension of his detention.

Wissam is still being tried according to the indictment that was submitted against him, and his trial session will take place on 8 June 2021. He is also concurrently subjected to administrative detention without charge or trial.

The persecution of Palestinians by occupation is no longer limited to physical acts of public and popular solidarity. Still, it now extends to everyone who publishes a post on social media that falls under the Israeli military’s definition of “incitement.” This had become the approach of the occupation authorities as it aims to repress the Palestinian people and impose control over them, criminalizing all legitimate action or words under a framework of linking it to “terrorist acts.”

Double Standards... A factor to the Israeli apartheid regime

The censorship imposed by the occupation authorities affects all Palestinian users of social media sites. It is not only the publication of posts themselves that are monitored and claimed to constitute incitement, but also the number and types of comments, and the number of likes so that these numbers are used to support the indictments of Palestinian detainees and determine the “danger” posed by the detainee’s post.

Through military orders, the Israeli occupation authorities have legalized the violation of freedoms of speech and expression, which apply—in violation of the law—to Palestinians only to perpetuate the apartheid regime. For example, the occupation state does not prosecute or question Israelis who use social media to urge the killing of Palestinians. At the same time, it throws Palestinians in prison for months or even years on end for leaflets containing pictures of martyrs or symbols or slogans of Palestinian parties banned under military orders.

According to a 2021 report issued by 7amleh - The Arab Center for Social Media Development, in 2020, one out of ten publications related to Palestinians and Arabs on Israeli social media networks contained insults, incitement, and racism, an increase of 16% over the year 2019.[2] Over time, with the impunity given to these practices by the Israeli occupation regime, incitement and racism against the Palestinian people continue to increase. Conversely, the prosecution and arrest of Palestinians on charges of incitement, on an illegitimate basis, is exacerbated and takes various forms under the broader aim of imposing greater repression on the Palestinian people and furthering the Israeli apartheid project.

[1] For further reading on arrests related to “incitement” on social media, and the policies of the occupation regime and Facebook, see here: https://bit.ly/32vSmEe

[2] 7amleh - The Arab Center for Social Media Development, “Racism and Incitement Index 2020: Racism and incitement against Palestinians and Arabs increase during the pandemic”, https://7amleh.org/2021/03/08/mushr-alansryh-walthrydh-2020-azdyad-alansryh-walthrydh-dhd-alflstynyyn-walarb-khlal-aljaehh