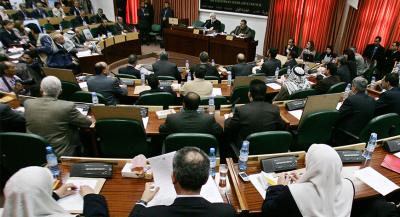 As of January 2018, there are currently 11 Palestinian Legislative Council members detained by the Israeli occupation forces. Only two of these individuals are being held after formally receiving charges, and participating in a trial in the Israeli military court. Thus, the majority of detained Palestinian legislators are held without charge for potentially indefinite periods of time under the policy of Administrative Detention.

Rather than this being a coincidence, such detainments represent a concerted attack on Palestinian political life, and the limited aspects of self-rule that were outlined under the Oslo II agreement. Not only do these arrests violate the right to express a political opinion, but they also undermine the very foundation of the Palestinian National Authority and, therefore, the potential for Palestinian self-determination.  25 years on, it is safe to say that the Oslo Accords are null and void, primarily due to the passing of the interim period and concerted Israeli disregard.

This factsheet will therefore provide details on the Palestinian Legislative Council - its formation and responsibilities - , the process of administrative detention – how it is used to silence dissenting voices and stifle freedom of expression - , and finally the international law applying to these detainments.

The Palestinian Legislative Council came into being following the formalization of the  Gaza-Jericho Agreement in 1994, and its follow up as part of the Interim Agreement on the West Bank and the Gaza Strip (Oslo II), which was signed in September 1995.

Under the latter agreement, a Palestinian legislative ‘Council’ was to be established alongside a Presidential position and office. Most aspects of civil law and administration within the defined Area A and B were to be transferred to these bodies, with the President acting as an executive power and the ‘Council’ as a legislative body. (Oslo II Agreement, 1995: Article III)

The whole process was to represent a step towards “the realization of the legitimate rights of the Palestinian people and their just requirements...” while also providing “a democratic basis for the establishment of Palestinian institutions.” (Oslo II Agreement, 1995: Article II)

The first election for Palestinian Legislative Council was held on 20 January 1996, with the council sitting for the first time on 7 March 1996. The most recent election was held on 25 January 2006. Since 2007, the Parliament has not been able to sit, with Mahmoud Abbas, in his role as the executive, wielding total legislative power.

In essence, the spirit and letter of the Oslo II Agreement was aimed at creating limited self-rule within the designated areas of the West Bank and Gaza, which does not impinge upon any ‘final status issues’. That said, despite a number of provisions that require Israeli consultation, the agreement does give room for a genuinely democratic institution that should be moderately free of Israeli interference. There are no references to who may be elected, nor a right on the behalf of the occupier to harass or detain members of the Palestinian National Authority. Regardless, a concerted campaign of targeting PLC members began in 2006.

Regulated primarily by the ‘Emergency Powers (Detentions ) Law’ (1979) and Military order 1651 (2009), the process of administrative detention allows for the detainment of an individual without charge or trial for a period of 6 months, which can be renewed indefinitely. For residents of the West Bank, the order must be signed by the relevant Area Commander of the occupation forces. In the case of Jerusalem residents, it must be signed by the occupation Minister of War Avigdor Liberman. Following the issuance of the order, it must be confirmed by a judge, whether that be in a civil court for Jerusalemites, or in a military court for West Bank ID holders.

There is a right to appeal the order, though, since the decision is based on ‘secret security information’, the process is usually fruitless. For a legal advocate to argue against an unknown claim means that the chance of success is close to zero.

Addameer’s legal and documentation work indicates that almost all uses of administrative detention were against students, activists, journalists, human rights defenders, and Palestinian Legislative Council members. In essence, it can be said that administrative detention is used primarily against those who the occupation wishes to silence but without a clear route to bring charges against them even in a military court with a 99.74% conviction rate.[1] As of writing this document, there are 434 administrative detainees.

According to the International Covenant on Civil and Political Rights (ICCPR), an individual cannot be discriminated against on the basis of “political or other opinion” or “national or social origin”. As a result of Israel’s ascension to this instrument, persecuting members of the Palestinian Legislative Council represents a violation of international law.

According to Article 42 of the Fourth Geneva Convention, an individual may be detained only if “the security of the Detaining Power makes it absolutely necessary.” (Convention (IV) Relative to the Protection of Civilian persons in Time of War. Geneva, 12 August 1949)

Further, arbitrary detention is prohibited by the ICCPR under Article 4. It states that State parties may only derogate from their obligations in a “time of public emergency which threatens the life of the nation…”.

Addameer considers the detainment of PLC members, through the method of administrative detention, a direct attack on the political life of Palestine. Not only does it undermine the right to freedom of expression, and political opinion, but it also undermines any hope that Palestinians have to realize their right to self-determination.