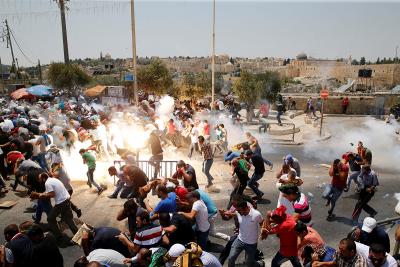 On 14/7/2017, three Palestinians, Muhammad Jabarin (30 years old), Ahmad Jabarin (20 years) and Muhammad Jabarin (19 years), from the village of Umm al-Fahm in the occupied territories, carried out an operation that resulted in the death of two Israeli policemen at the entrances to Al-Aqsa Mosque. As a result, Israeli occupation forces imposed collective punitive measures on all Palestinians by prohibiting them from attending prayers at Al-Aqsa Mosque, unless they pass through the electronic gates set up before the mosque which is an unacceptable practice for all Palestinians. To protest such escalatory measures, Palestinians have been praying outside Al Aqsa mosque, near the electric gates. Furthermore, the IOF continued to impose closures on the Old City of Jerusalem and around Al-Aqsa Mosque by installing barriers at their entrances, and prevented citizens from entering the Old City. The policy of collective punishment practiced by the Israeli occupation is a violation of most basic and internationally recognized rights, including the right to freedom of religion, the right to freedom of movement, the right to privacy and self-determination.

160 Palestinian were arrested in Jerusalem since 14/7/2017 until 25/7/2017. this number includes about 30 children under the age of 18. Most of the arrests were from the Old City, Lion’s Gate, Al-Tur and Al-Issawiya areas. Since the outbreak of the clashes on 14 July 2017, the Red Crescent has recorded about 400 cases of suffocation and injuries by live ammunition or rubber-coated bullet.

The arrest of political leaders in Jerusalem:

On 20/7, Israeli occupation forces arrested 15 political and field leaders in Jerusalem, including Hatem Abdel Qader, Adnan Ghaith, Nasser Hadmi, Nasser Ajaj, Muhammad Abu Al-Hawa and others. They were later released under the following conditions: To refrain from entering Al-Aqsa mosque,  not to engage speeches and demonstrations, not to conduct media interviews, in addition to preventing them from communicating with citizens who were arrested during clashes. Additionally, the Jerusalemite activist and chairman of the committee of prisoners’ families in Jerusalem, Amjad Abu Assab, was arrested and subjected to four-hour interrogation at Moskobyeh interrogation center. He was later released on similar terms. The occupation forces also arrested the father of martyr Mohammed Abu Ghannam, from his house in al-Tur neighborhood in Jerusalem on 24/7/2017and he was released on 25 July 2017. The IOF also arrested Ismaeel Abu Ghannam, the cousin of the martyr, whose detention was extended until the 26 July 21017.

30 children were arrested in Jerusalem since July 14, 2017. On Sunday, 23/7/2017, occupation forces arrested two minors: Tamara Abu Laban (16 years old) from al-Tur village, Alaa Al-Ruwaydi, 16, from Silwan in Jerusalem, whose detention have been extended and they have not yet been released. The occupation claims that the arrest was made based on their Facebook posts. A number of children were beaten and assaulted during their arrests. By this, the occupation violates the second principle of the Convention on the Rights of the Child, article 37 (b), which stipulates that the best interests of the child shall be taken into consideration, that he shall not be deprived of his liberty unlawfully and arbitrarily and that detention shall be the last resort and for the shortest possible period of time.

Assaults on journalists while performing their duties:

Israeli occupation forces assaulted journalists during their work. They were beaten, prevented from carrying out their duties, they also had their equipment confiscated. Among them are photographer Sinan Abu Mezer, Reuters photographer, and Journalist Afif Amira, a photographer for the Palestinian news agency Wafa, and the crew of Sky News. They are: Shireen Younis, photographer Mohammed Abu Hadwan, and technical Muammar Yassin. In addition to journalist Rami Khatib of the Palestine TV crew.

The brutal attacks during the arrest and extrajudicial executions:

It was noticed that during the current escalations,  Israeli occupation forces deliberately used excessive force arbitrarily and randomly. During an arrest campaign at Wad Al Jouz neighborhood, a group of special unit forces and undercover soldiers attacked a number of young men and arrested them after severely beating them. They were: Moataz Sa'ida, Louay Jaber, Amir Ghaith, Ibrahim Abu Arafa, Suhaib Abu Sneineh and Sa'ad Kayana. The IOF  focused the beatings on the head area using pistols, resulting in severe injuries to the young men.

12 martyrs were killed by the IOF since 14/7/2017, which indicates that the occupation forces continue to practice field executions and deliberately use lethal force against Palestinians violating international laws and conventions.

From the halls of the Magistrate's Court in Jerusalem / Addameer lawyer provided testimonies from detainees:

Addameer represented Ali Abu Saniyeh, a  19 years old from Silwan, who was arrested on Friday in Salah al-Din Street in Jerusalem while performing Friday prayers with thousands of other Palestinians, including the elderly and children. After the prayer, the Israeli occupation forces attacked the citizens. Ali ran to a building’s roof where the press and ambulances were located to protect himself from the tear gas and live bullets. Few minutes later, he started looking for his father and brother who were praying as well, but he was startled by three soldiers attacking him, he then tried to protect his head by bending down and covering his head with his hands. Then one of the soldiers stepped on his neck and face and continued to yell and insult him. The lawyer stated that the beating marks on Ali’s body are visible.

About 20 detainees were present at the Magistrate Court to attend court hearings, where most of the hearings resulted in detention extension order for further interrogation. Addameer lawyer reported that all of the detainees were subjected to beatings during detention. One of them had broken legs and another one was severely injured. The lawyers added that the detained were heavily bruised and the beating marks were visible on their faces and most of their body parts.

Israeli occupation forces did not hesitate to cross all the red lines to arrest unarmed Palestinian civilians even in hospital rooms, or to abduct the bodies of extrajudicially killed Palestinians for the purpose of withholding them.

Addameer’s field researcher documented the details of Al-Maqassed Hospital raid, after the body of extra-judicially executed Mohammed Hassan Abu Ghannam, 20 years old, was taken to the  Hospital. Hundreds of IOF forces stormed the hospital and fired sound and gas bombs at civilians surrounding the hospital to disperse them and confiscate the body. Israeli special unit forces stormed the emergency department and assaulted the doctors. However, about 300 people prevented them from reaching the body of Abu Ghannam. During this attack, many citizens were injured in the vicinity of the hospital, in addition to the arrest of three young men.

The policy of withholding bodies by the occupation authorities is a collective punishment that target families of the martyrs and the Palestinian society as a whole. This practice is a violation of international humanitarian law as well as international human rights law including violations of the right to dignity, freedom of religion, and the right to practice culture. The withholding of the bodies also greatly adds to the grief, anxiety, and trauma of the families who are dealing with the loss of a loved one, and who are also being denied their cultural and religious rights to mourn and to bury them in accordance with their faith.

111 cases of arrests from different areas in the West Bank were documented between 14/7/2017 and 25/7/2017, most of which occurred during pre-dawn raids. These arrests targeted different sectors of the Palestinian society, including children, women, students and senior citizens, as well as members of the Palestinian Legislative Council, such as the arrest PLC member Omar Abdel Razek. During these raids, Palestinians were subjected to physical violence, house searches, destruction of properties, and hospitals raids, such as the raid of Hebron Public Hospital.

The raid and siege of Kobar village west of Ramallah:

The residents of the village of Kobar have been living under siege and subjected to daily harassment, after Halamish operation that resulted in the killing of three Israeli settlers by Omar Al-Abed (20 years old), who is a resident of the village. Israeli occupation forces have been storming the village on a daily basis by dozens of vehicles, hundreds of soldiers, police dogs and bulldozers. IOF arrested the brother of Al-Abed and his mother, after raiding their home more than once. The daily harassments included, raiding dozens of houses and closing the main entrance to the village. Approximately 15 Palestinians were injured by rubber-coated bullets from Kobar and the surrounding villages. The siege imposed on the village of Kobar and these practices of collective punishment are a grave violation of the Fourth Geneva Convention, mainly Articles 33 and 34.