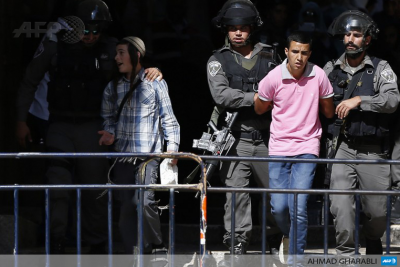 Ramallah - Over the past eight weeks, amid escalating violence in Jerusalem and the rest of the occupied West Bank, Israel has pushed forward a slew of harsh policies that target Palestinian children.

The latest bill, approved by the Israeli Ministerial Committee for Legislation, proposes custodial sentences for children, as young as 12, convicted of “nationalistic-motivated” offences. The actually serving of the sentences would be deferred until the children reach the age of 14. A first reading of the bill in the Israeli Knesset, or parliament, on November 25, resulted in a vote of 64 in favor and 22 opposed.

The draft bill comes on the heels of Israeli prosecutors charging 13-year-old Ahmad Manasra with attempted murder for allegedly carrying out a stabbing attack in East Jerusalem on October 12. Israel’s current criminal law prohibits custodial sentences against children under 14 in favor of rehabilitation and reintegration.

The Knesset further passed a series of amendments to the Israeli penal code and youth law. They imposed a 10-year prison sentences for throwing stones or other objects at moving vehicles with the possibility of endangering passengers or causing damage. Those convicted of throwing stones with the purpose of harming other would receive double the sentence. The amendments also reduced judicial discretion, instituting mandatory minimum sentences of no less than one-fifth of the potential maximum sentence and restricting suspended sentences to special circumstances only.

The Knesset also amended the national insurance law to deprive children convicted of “nationalistic-motivated” offenses and “terrorist activities” from social benefits during their imprisonment. It further allowed Israeli juvenile courts to impose fines on their families up to NIS 10,000 (US$2,580).

Addameer and DCIP are deeply concerned by these amendments and proposed laws aimed at Palestinian youth, and specifically children. While they should apply to Israeli Jews and Palestinians alike, in practice they discriminately target Palestinian residents of Jerusalem and Palestinian citizens of Israel. Previous policy changes affecting related offenses have applied almost exclusively to the Palestinian population. Israeli extremists and settlers on the other hand rely on their government to ignore their attacks against Palestinians. Israel’s record of seldom holding perpetrators accountable speaks for itself.

The policy changes are part of a wider crackdown by Israeli authorities to quash unrest sweeping across Jerusalem and the rest of the occupied West Bank. Since the start of October, at least 103 Palestinians and 19 Israelis have died from the violence, according to news reports. DCIP has confirmed 20 Palestinian child fatalities among them.

The past eight weeks have seen Israeli forces arrest over 2000 Palestinians, including at least 350 children, according to Addameer. As a result, the number of Palestinian children in Israeli prisons has risen from 156 at the end of September to an estimated 400 in November, based on Addameer’s research.

In October, Israel Prison Service opened a juvenile section at Givon prison, near the central city of Ramle, to cope with the increased volume of Palestinian child detainees. Based on the testimonies of Palestinian children held in the section, obtained by Addameer and DCIP, the conditions described were inadequate and failed minimum standards for a prison. The children also reported that Israel Prison Service applied collective punishment against them, including denial of family visitation and the use of solitary confinement.

Israel’s ill-treatment of Palestinian child detainees remains widespread and systematic. Data compiled by DCIP between January and June 2015 shows that 86 percent of Palestinian children endured some form of physical violence following arrest, a 10 percent increase from 2014. Israeli interrogators also use position abuse, threats, and solitary confinement to coerce confessions from some children. In the majority of these cases, Israeli authorities deprived children of legal counsel and improperly informed them of their rights.

One of the children detained at Givon prison, Ahmad Nasser, 17, told Addameer that on October 5, while he was on his way home from school in Jerusalem, a dozen Israeli soldiers and police officers savagely beat him. They transferred him to a police station in a nearby settlement, where they proceeded to remove his undershirt and wrap it around his head and face, before photographing him.

Israeli prosecutors used these photos of his covered face as evidence of Ahmad Nasser having participated in clashes and charged him with throwing stones at an Israeli police officer. Addameer has documented several such cases in recent months.

Addameer and DCIP express their outrage over the dangerous trend of excessive use of lethal force against Palestinian children. Since the start of October, DCIP has confirmed 20 Palestinian child fatalities, all except five while carrying out alleged stabbing attacks. A further 283 Palestinian children have sustained injuries, based on DCIP’s initial data. International law defines a child as anyone under the age of 18.

“Security cameras and eyewitness reports in several of these incidents reveal that the alleged child assailants no longer posed a threat when Israeli forces shot them multiple times at close range,” said Ayed Abu Eqtaish, Accountability Program director at DCIP. “While all states have the right to protect their citizens from violence, it cannot be used to justify extrajudicial killings or the unlawful use of intentional lethal force.”

On November 2, Israeli forces killed Ahmad Awad Abu al-Rab, 16, near the Jalame checkpoint, north of the West Bank city of Jenin. A witness told DCIP that five soldiers in a military jeep approached Ahmad and another Palestinian youth at a Palestinian gas station near the checkpoint that morning. The soldiers searched the two teenagers and found a pocketknife on the other youth. Ahmad attempted to get away and brandished his pocketknife at one of the soldiers, who then fired at his legs. Several military jeeps arrived at the scene and ordered the witness to vacate the area. While walking away, he saw Ahmad was still alive, on his knees, surrounded by the soldiers.

The cause of death and exact circumstances remain unknown. Israeli authorities have rejected opening investigations into similar killings and refused autopsy requests by the families. An Israeli court denied a request by human rights group Adalah and Addameer for an autopsy on 16-year-old Muataz Oweisat, who sustained fatal gunshot wounds at the hands of Israeli forces following an alleged stabbing attack in East Jerusalem.

Israeli authorities have withheld the bodies of nine children killed while carrying out alleged knife attacks. Beyond the punitive nature of the action, it has made independently verifying the details and circumstances of the incidents more difficult.