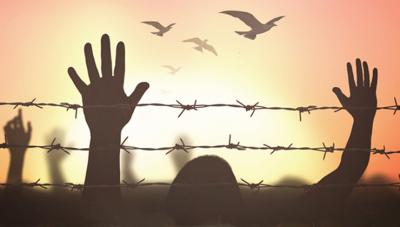 Emergency regulations, imposed by the Israeli government without any legal authority, overwhelming and disproportionately violate prisoners’ human rights.
26 March 2020
Attorney Abeer Baker, Adalah – The Legal Center for Arab Minority Rights in Israel, Addameer Prisoner Support and Human Rights Association, and the prisoner Kafri Mansour together were slated to file an urgent petition to the Israeli Supreme Court this morning, Thursday, 26 March 2020, against emergency regulations enacted in the shadow of the coronavirus crisis preventing lawyers and family members from meeting with prisoners being held in Israeli detention.
CLICK HERE to read this press release on Adalah’s website: https://www.adalah.org/en/content/view/9929
According to the new regulations imposed on 15 March 2020, the Israeli public security minister, at the recommendation of the Israel Prison Service (IPS) director or the Israeli police commissioner, may ban visits with prisoners and detainees, and can limit prisoners’ consultation with a lawyer only by telephone, which he did.
In addition to the harm caused by the regulations to all prisoners held in Israeli facilities, they are particularly stringent with individuals designated by Israel as “security prisoners” – overwhelmingly Palestinians from the Occupied Palestinian Territory (OPT), numbering around 5,000. The emergency regulations allow these prisoners to consult by phone with their attorneys only when a court hearing on their case is slated to be held during the emergency period. While they are also banned from family visits, the result is that “security prisoners” will be banned from any contact with the outside world and will thus be prevented to report to families or lawyers about violations of their rights inside prisons.
The petition describes, for example, a telephone conversation between co-petitioner attorney Abeer Baker and a prisoner Israel’s Ofer prison, which was broadcast via loudspeakers in front of prison guards and other inmates.
Adalah Attorney Aiah Haj Odeh argued in the petition that, while there is no disputing the IPS's duty to ensure the health of prisoners and detainees, the emergency regulations banning visits overwhelmingly and disproportionately violate the prisoners’ rights and therefore must be repealed. The regulations also significantly harm the rights of juvenile prisoners, eliminating their right to visits by attorneys and family members even though this right is enshrined in Israeli law.
The petitioners further maintain the emergency regulations constitute a disproportionate violation of constitutional rights. In addition to the violation of the right to counsel, the regulations also violate the right to due process, access to the courts, the constitutional right to dignity and equality, and attorney-client privilege.
The petitioners also stressed that the Israel government has imposed the ban without any legal authority and it must therefore be rescinded for that reason as well.
Article 39(d) of Israel’s Basic Law: The Government (2001) explicitly states that “Emergency regulations may not prevent recourse to legal action, or prescribe retroactive punishment or allow infringement upon human dignity.” The Israeli government is not authorized, therefore, to implement such emergency regulations.
The petitioners call on the Israeli Supreme Court to cancel the regulations or, alternatively, enable prisoners to conduct telephone conversations with family members and attorneys while preserving their confidentiality and privacy.
Adalah Attorney Aiah Haj Odeh further commented:
“The challenges that this state of emergency pose to Israeli authorities cannot allow them to run rampant over fundamental human rights. International law requires that Israel must recognize the right of prisoners and detainees to visit with family, and to consult with lawyers and access the courts. Adalah is very concerned about the manner in which the Israeli government has imposed ‘emergency regulations’ since the outbreak of the coronavirus, and we continue to argue – as in our Supreme Court petition against digital surveillance last week – that there is no constitutional infrastructure that gives the government any authority to take such action."
CLICK HERE to read the petition [Hebrew]: https://www.adalah.org/uploads/uploads/Corona_prison_visits_petition_25…
CLICK HERE to read Emergency Regulations 8399 [Hebrew]: https://www.adalah.org/uploads/uploads/Emeregency_regulations_8399_20.p…
CLICK HERE to read Emergency Regulations 8384 [Hebrew]: https://www.adalah.org/uploads/uploads/Emergency_regulations_8384_20.pdf