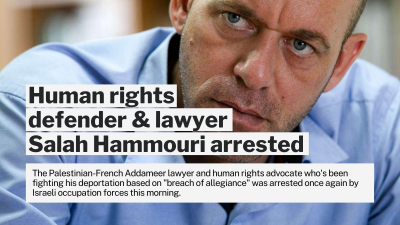 Salah Hammouri, 36 years old, is a Palestinian-French Jerusalemite, long-time human rights defender (HRD), lawyer, and former political prisoner. Over the years, Salah has been relentlessly targeted by Israeli occupation authorities, subjected to arbitrary arrests, administrative detention without charge or trial, exorbitant fines, travel bans against him and his family, the deportation of his wife and French national Elsa Lefort, and, most recently, the illegal revocation of his permanent residency and forced deportation from Jerusalem on 18 October 2021. Moreover, on 8 November 2021, a Front Line Defenders investigation conducted in collaboration with Citizen Lab and Amnesty International’s Security Lab found that Salah Hammouri had been one of six Palestinian HRDs hacked by Israeli NSO Group’s notorious Pegasus spyware.

For that, Salah Hammouri has emerged as one of the most prominent cases of the Israeli occupation and apartheid regime’s systematic harassment and persecution of Palestinian human rights defenders. His case was highlighted in Amnesty International’s landmark report demonstrating Israel’s crimes of apartheid, specifically the illegal practice of forcible population transfer, deportations, and demographic engineering. Similarly, on 3 March 2022, during its review of the fifth periodic report of Israel on its implementation of the International Covenant on Civil and Political Rights (ICCPR), the UN Human Rights Committee noted Salah’s case in pointing to Israel’s alarming arbitrary policy of residency revocation based on “breach of allegiance” to control the demographic composition of Jerusalem.

Still, and at the time of his latest arrest, Salah continues to wage a legal battle challenging his illegal residency revocation. Salah’s defense council, represented by HaMoked for the Defense of the Individual and Adv. Leah Tsemel submitted an appeal against the residency revocation, along with a petition to suspend the procedures associated with the residency revocation—most prominently the travel ban and halting of residency social security and insurance benefits.

Nevertheless, the Israeli High Court on 26 December 2021 rejected appeals made to suspend the procedures of the residency revocation. On 24 February 2022, the Israeli Attorney General, in response to the High Court, also recommended rejecting the appeal, citing “secret information” provided by the Israeli Interior Ministry stating that Salah Hammouri remained a “security threat.” The withholding and use of “secret information” most notably mirrors the Israeli occupation’s practice of administrative detention, which places Palestinians under indefinite detention without charge or trial. More still, the Israeli occupation regime’s recent arbitrary and blanket criminalization of six leading Palestinian civil society organizations, Addameer among them, in October 2021, equally relied upon the denial of due process and the use of alleged “secret evidence.”

Further, in light of the discovery of the Pegasus spyware on the devices of six Palestinian HRDs, several NGOs, including the International Federation for Human Rights (FIDH), urged the European Union to place NSO on its global human rights sanction regime; among others, FIDH and Salah Hammouri planned to file a joint complaint in France against NSO group, in light of the violations against him as a French national.

Amid legal procedures and advocacy challenging the Israeli occupation regime’s gross violations amounting to war crimes and the crime of apartheid, Salah’s case has been increasingly highlighted on the international fora by international institutions, NGOs, human rights organizations, and State parties. For that, Israeli occupation authorities have systematically harassed and targeted Salah, a vocal Palestinian human rights advocate, to repress his right to free expression and delegitimize and discredit his work as a human rights defender.

It is not enough for international actors to merely issue statements; inaction by the international community and States—including France, of which Salah Hammouri is a dual national—continues to lend blanket impunity to the Israeli occupation and apartheid regime as it escalates its attacks on Palestinian civil society and human rights defenders. We call on States, international institutions, and all third parties to take concrete action against Israeli occupation authorities’ continued harassment and criminalization of Palestinian human rights defenders and civil society and to call for the release of Salah Hammouri and all Palestinian political prisoners arbitrarily held in Israeli prisons.