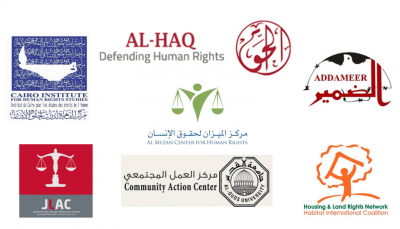 Final Statement welcoming the concluding observations on Israel by the Human Rights Committee.pdf

On 30 March 2021, the United Nations Human Rights Committee (the Committee) issued its concluding observations on its review of Israel’s implementation of the International Covenant on Civil and Political Rights (ICCPR), which took place on  2 and 3 March 2021.

The Committee emphasized in its concluding observations that the 2018 Basic Law: Israel – The Nation-State of the Jewish People “may exacerbate pre-existing systematic and structural discrimination against non-Jews", reiterating concern “that, under this Law, the right to self-determination is “unique to the Jewish people”, […] and the development of Jewish settlement is viewed as a national value (art. 2)."

In their joint submission and subsequent engagement, CIHRS and partners called on the Committee to build on mounting recognition by global civil society, UN treaty bodies, and Special Procedures that Israeli officials are committing the crime of apartheid. The organizations called on the Committee to recognize that Israel, through its laws, policies, and practices—particularly in the domains of nationality and land—imposes and maintains an apartheid regime over the Palestinian people and to urge Israel to repeal all discriminatory laws, policies, and practices enshrining racial domination and oppression against the Palestinian people as a whole.

Committee member and rapporteur, Hélène Tigroudja, emphasized during the discussion with the state of Israel that “according to the information we’ve received, discrimination based on ethnic or national origin seems to be omnipresent and is manifested in a significant number of rules, laws, and practices which govern the daily functioning of the country […]”. The rapporteur addressed the central question of “whether the State party planned to take any measures to eradicate all policies and practices of racial segregation […].” The rapporteur reiterated that the question built upon the concluding observations of the Committee on the Elimination of Racial Discrimination of 2019, which urged Israel to “give full effect to article 3 of the Convention” [concerning the prevention, prohibition and eradication of all policies and practices of racial segregation and apartheid] “to eradicate all forms of segregation between Jewish and non-Jewish communities and any such policies or practices that severely and disproportionately affect the Palestinian population” on both sides of the Green Line. Given that the mission of Israel did not respond to this fundamental question, the rapporteur reiterated her question inquiring about steps Israel plans to take “to eliminate structural racial discrimination and end segregationist policies.”

It is within the overarching system of apartheid that Israel commits its widespread and systematic human rights violations against the Palestinian people. The overall objective of Israel continues to be the expropriation of Palestinian land and property, to manipulate and engineer the demographic composition by transferring Palestinians in order to create and expand Jewish localities on both sides of the Green Line. The Committee evidences this underlying policy in its finding of increased house demolitions of Palestinian homes, forced expulsions, the expansion of illegal Israeli settlements and illegal transfer of Israeli settlers into the occupied Palestinian territory, and overall forcible transfer.

The Committee advanced important analysis and recommendations related to Israel’s widespread and systematic human rights violations against the Palestinian people, highlighting illegal settlements, settler violence, racial segregation, “vague and overbroad” counter-terrorism legislation, the silencing of civil society and attacks on human rights defenders, including punitive residency revocation, ongoing collective punishment, including the ongoing illegal blockade and closure of the Gaza Strip, the withholding of bodies of deceased Palestinians, widespread practice of arbitrary arrests, “widespread and systematic practice of torture and ill-treatment” against Palestinians in Israeli detention, including children, the excessive use of lethal force by Israeli occupying forces, restrictions on freedom of movement, the denial of family unification for Palestinians, also emphasizing a “general climate of impunity” and the overall “lack of accountability”,  effective remedies, and guarantees of non-repetition for such violations. The breadth of the UN Human Rights Committee’s findings, covering ongoing violations of a wide spectrum of Palestinians’ civil and political rights under the ICCPR shows that such human violations are neither accidental nor isolated. They are widespread, systematic and part and parcel of Israel’s apartheid regime over the Palestinian people.

CIHRS and partners urged the Committee to call on Israel to cease all measures and policies which contribute to the fragmentation of Palestinians, denying the Palestinian people their right to self-determination and permanent sovereignty over their lands and other natural resources, including the ongoing closures of Jerusalem and the Gaza Strip, the construction of the Annexation Wall, and the imposition of severe movement and access restrictions.

The Committee also noted with deep concern in its concluding observations, “the continued construction of the Wall in the West Bank, which significantly restricts Palestinians’ enjoyment and exercise of rights and freedoms, including freedom of movement and access to land, especially agricultural land, property and natural resources (arts. 1, 2, 9, 12, 17, 18 and 26).” Moreover, it called on Israel to “cease the construction and expansion of settlements”, “put an end to the practice of expropriating […] private land owned by Palestinians […]”, “take immediate steps to dismantle the Wall, with a view to ensuring Palestinians’ full access to their lands and livelihood and enjoyment of the Covenant rights, including the right of self-determination”.

The organizations also urged the Committee to call on Israel to ensure the right to family life by ending its demographic laws and policies regarding family unification and child registration. In this regard, the Committee strongly reiterated “its previous recommendations that the State party revoke the Citizenship and Entry into Israel Law (Temporary Order), with a view to removing disproportionate and adverse restrictions on the right to family life.”

The Committee also headed the calls of the organizations by addressing “Israel’s use of counter-terrorism legislation to criminalize work of civil society” and called on the state to “refrain from intimidating, harassing, arresting, detaining or prosecuting for terrorist offences, journalists and human rights defenders who are exercising their right to freedom of expression, and ensure that six Palestinian organizations designated as “terrorists” and declared “unlawful” are provided with procedural safeguards, including access to evidence, and the right of appeal to an independent body.” The Committee called on Israel to “guarantee effective protection of journalists and human rights defenders against any kind of threat, pressure, intimidation, attack and arbitrary arrests and detention”, and review its laws “that may restrict the exercise of freedom of expression with a view to bringing them into line with article 19 of the Covenant.”

Our organizations welcome these concluding observations and call on the UN and its member states to welcome these findings. Building upon this cumulative recognition, we urge states to condemn Israel’s establishment and maintenance of an apartheid regime over the Palestinian people as a whole, taking urgent and effective measures to dismantle it.