Palestinian Political Prisoner Nasser Abu Hamid Passes Away while Incarcerated, Bringing the Total Number of Deaths in the Palestinian Prisoners Movement to 233 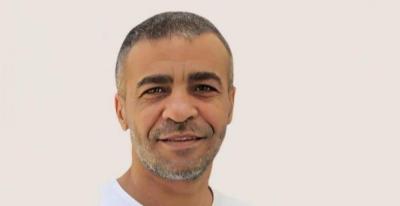 First diagnosed with lung cancer in August 2021, Abu Hamid received minimal oncological care at the Ramleh Prison Clinic, causing his health to deteriorate rapidly and his cancer to reach a critical stage. Despite pleas from Abu Hamid’s legal counsel and several humanitarian organizations such as the International Committee of the Red Cross—urging the Israeli Prison Services’ Parole Board to free Nasser through humanitarian release given his extremely frail conditions and his considerably reduced life expectancy—Abu Hamid remained in bondage until his final days. The Israeli Prison Service’s failure to release Nasser serves as an example of the Israeli settler-colonial and apartheid regime’s blatant disregard of human dignity and family rights protected under the Universal Declaration of Human Rights, the International Covenant on Civil and Political Rights, and the Fourth Geneva Convention.

Nasser Abu Hamid was born on 5 October 1972 in Al-Amari Refugee Camp in the occupied West Bank. Nasser had been arrested several times throughout the course of his life for resisting the Israeli belligerent occupation—first at the age of 11, and later in 1987, 1990, and 1996. Prior to his passing, Abu Hamid was confined in Israeli occupation prisons for more than 30 years, where he endured extreme incarceration conditions in overcrowded, narrow rooms that lacked basic minimum standards of adequate living. Such practices violate numerous international conventions—including the UN Standard Minimum Rules for the Treatment of Prisoners—all ratified by and mandatory for Israel as the Occupying Power to uphold.

Further, the Israeli occupation authorities blatantly violate international norms and conventions related to protecting and providing care for Palestinian prisoners experiencing illness. International humanitarian law guarantees the provision of necessary medical care to patients. Articles 76 and 91 of the Fourth Geneva Convention stipulate the right of sick detainees to receive necessary medical care, maintain a healthy diet, and have access to necessary medical examinations. Despite such laws, statistics compiled by human rights organizations indicate that the number of sick Palestinian detainees and prisoners in Israeli occupation prisons is currently around 600, with over 200 prisoners with chronic diseases and 24 prisoners diagnosed with cancer and other serious illnesses. Since 1967, with the death of Nasser Abu Hamid, the total number of Palestinian prisoners who have passed away in Israeli occupation prisons has reached 233—74 of whom have passed away as a result of medical negligence.

Compounding their crimes of medical neglect, Israeli occupation forces continue to withhold the bodies of the now-eleven Palestinian prisoners who have been martyred. By withholding bodies, Israel inflicts severe psychological pain on the deceased person’s family. As such Nasser’s family does not know when his body will be released for proper burial—if at all. Further, Nasser has four brothers—all of whom are also currently held in Israeli occupation prisons and are subjected to the same harsh conditions of detention and medical neglect he experienced prior to his passing. To add to the family’s suffering, Nasser’s family’s house was demolished several times—most recently in 2019.

By granting constant impunity to Israel, the international community has failed to protect Nasser Abu Hamid and allow him a humane and dignified passing at home surrounded by his family and loved ones. Yet Nasser, at the end of his life and in the face of the decades of violence he had experienced, remained true to his principles of resilience. Nasser refused his legal counsel’s advice to submit a pardon to the Israeli Military Commander in the West Bank to consider his release—instead choosing to pass without submitting to the demands of the Israeli Occupation Forces. In these difficult times, Addameer stands in solidarity with Abu Hamid’s family.